This article originally appeared in the July/August 2004 Gannetteer, the internal newsletter of the Gannett newspaper company.

Lorraine Ash, a features writer at the Daily Record at Morristown, N.J., chronicles her personal journey after the 1999 stillbirth of her daughter Victoria in “Life Touches Life: A Mother’s Story of Stillbirth and Healing” (NewSage Press, $13.95). 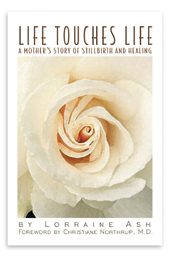 “I started to write when I was still in the hospital, on morphine, and not sure I would live,” Ash says. A Group B strep infection caused her daughter’s death. The physical healing, though, was only the beginning.

In her book, Ash delves into the emotional, social and spiritual aspects of her recovery, as well as how she sees her role in educating the public. Although 26,000 stillbirths occur in the U.S. every year, initiatives for stillbirth research are just beginning to get under way.

“I wanted to write words of understanding for those who did not share my fate, and more to excite and inspire lawmakers and doctors to spend research dollars to stop this ... wherever it could be stopped.”

In addition to telling her story through the written word, Ash went to Capitol Hill to lobby for stillbirth research funding. She and other stillbirth parents met with members of Congress “to present the problem of stillbirth with a human face,” says Ash.

More information about Ash’s book can be found at https://lorraineash.com/.