This article originally appeared in the November 12, 2006 (Morris County NJ) Daily Record and on the Daily Record web site.

On an ordinary summer morning at a strip mall on Route 9 in Freehold, Rick Estelle took the first step out of his suburban life. The 22-year-old high school graduate lived with his grandparents in Wall and, though he was between jobs then, he usually worked as a clerk.

By his side was Sgt. Cyle Alden, five years older and worlds away from Estelle’s reality. Alden, a paratrooper with the elite 35th Signal Brigade and stationed at Fort Bragg, N.C., was sent to his home state with the Special Recruiter Assistance Program. The idea is that young people who hail from the same place will relate to him. 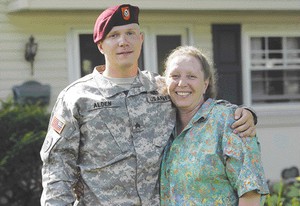 Alden, who grew up in Somerville, liked the assignment and not just because it gave him a chance to visit his mother and stepfather in Parsippany and his father in Clinton. As a sergeant, he likes to help mold young privates. For many, their Army experience is their first time away from home, maybe even their first real job.

Sometimes they need help even after Advanced Individual Training on how to maintain and never lose the thousands of dollars’ worth of equipment they are issued, Alden said. It takes a while for some to understand the importance of PMCS, too. Preventive Maintenance Checks and Services.

“We go out on convoys a lot and we have Humvees. These soldiers are used to their car back home. You get in, turn the key and drive. But in Iraq you have to do your PMCS,” Alden said.

He takes Army values seriously: loyalty, duty, respect, selfless service, honor, integrity, personal courage. Sometimes they are instilled during basic training, Alden said. Other times, it takes longer for them to sink in.

“Those values are what makes a man a man,” Alden said. “One of the biggest things that makes a man is accountability. Whether your actions have positive or negative repercussions, you take account for them.”

Alden is married and a graduate of East Stroudsburg University with a psychology degree. He’s served in Iraq twice. The first time he was sent home after a Humvee convoy accident because of a severe knee injury requiring a microfracture procedure. That knee already had seen a lot of action jumping from the skies at Fort Bragg.

Alden is, in short, just the kind of guy Estelle needs to see to get a sense of what is possible for him.

Estelle said he wanted to sign up for the U.S. Army Reserve. He does not want Alden’s job — to secure the data and voice networks on which everyone depends. Rather, Estelle had his mind set on the job of human resources specialist.

“I don’t want to join the main Army, just for the fact I wouldn’t want to get called overseas,” Estelle said. “I just don’t want to see combat at any point in my life. If I join the Reserves I’ll get technical training for the field of work I’d like to be in. I also want what basic training would give me — work out my body, my mind. I want to get more respect at home, too.”

The war on terror is important to him only in that it is not keeping him from joining.

Alden, on the other hand, joined two weeks after college for two reasons: 9/11 and the need to pay back college loans. Frankly, he believes in what he is doing in the Army.

“Terrorists are going to fight us. It’s that simple. They sought us out. We didn’t start any war. There was no first strike with us,” he said. “Sometimes you’ve got to put it bluntly to people: Would you rather us be over there, or would you rather it be here?”

Not that the example of his service, or his attitude, makes recruitment easy during wartime. The U.S. Army made 92 percent of its recruitment goal for active-duty soldiers in fiscal year 2005, according to the American Forces Press Service. The Army Reserve made 85 percent of its goal, and the Army National Guard, 80 percent.

Parents of today’s recruits, who came of age in the Vietnam era, are wary of recruiters and protective of their children, according to Alden.

“On our side, we have to understand that they have their perceptions and that’s just the way it’s going to be,” he said.

That’s just the way it is with his mother, too.

“I am extremely proud of Cyle, but I am always, always afraid for him and any other serviceperson,” said Lisa Alden, of Parsippany. “I am proud he feels the desire to serve our country, but as a mother I hurt all the time because he isn’t here and he’s not always safe.”

Recruitment generally is easier in the South than the North, Alden said, probably because the presence of so many military bases in the South make the military more a part of people’s lives.

Sgt. 1st Class Cedric Payne, who ran the Freehold recruitment station during Alden’s time there this summer, said young people in New Jersey are more aware of the war than those in some other areas of the country. Perhaps that is because families tend to be more affluent and homes have computers that provide easy access to an array of information.

Payne said the military can remain appealing to young people without the advantages of a wealthy family.

“We see impressionable young men and women who, for the most part, do not know what they want to do,” he said. “You’ve got to talk to them about a life cycle, ask them where they see themselves in five years, 10 years, ask them how they’re going to get there and pay for this or that school. A lot of them come from families that can’t afford it, but still a lot of them don’t know what they want to do, and that’s where we come in.”

Some recruiters work 15 or 16 hours a day at their job, he said, and reach out to potential recruits in innovative ways. This summer in Central New Jersey they were at a Trenton Thunder baseball game at Waterfront Field in Trenton and a National Hot Rod Association event in Englishtown, in addition to usual appearances in malls and schools.

Last year the federal government spent some $4 billion on recruitment efforts, according to “Military Recruiting 2005.” The figure includes the cost of operating recruiting stations, advertising, pay and benefits for 22,000 recruiters and other recruitment-related spending, such as enlistment bonuses.

Yet all it took to get Estelle to reach out was a talk with a friend who had enlisted and was going through basic training.

“It’s half my idea, half his idea,” Estelle said.

At the station in Freehold, Alden and Sgt. 1st Class Julie-Ann Young brought Estelle through the process. He had scored very high — 81 — on the ASVAB (Armed Services Vocational Aptitude Battery) test. It takes a 31 to be eligible to join the Army. A B student scores 31 to 40, Payne explained, and an A student, 50 to 99.

Alden told the would-be recruit what they all want to know — about his experiences in the Army and in Iraq. A paratrooper from Alden’s brigade can provide secure, reliable communications to the Pentagon or even the White House within 60 seconds of landing anywhere in the world, according to a description on Fort Bragg’s Web site.

“In my job we don’t always get to see what we do, but I know that infantry soldiers who have a lot more negative contact use my network. In a way, I keep them safe,” Alden said.

“Everybody has to have contact over there. Usually, at any time somebody could be listening. But not with us. Ours is a completely secure network, so we enable everybody from commanding generals down to privates to be able to talk to each other within Iraq as well as have a way to call back home.”

Nevertheless, he said, an American soldier in Iraq, no matter what his or her specialty, can become a jack-of-all-trades participating in convoys, security patrols and guard duty.

Alden’s road has had its personal challenges. During three years of marriage, he said, he has been next to his wife only 11 months.

But the road has had plusses, too: His college loans are paid off; the Army has become a second family; he loves the guys with whom he serves and he knows together they have done some good in the midst of war.

He fondly remembers one day he distributed soccer uniforms to Iraqi children in the Green Zone.

“A place back here donated hundreds of soccer uniforms and balls and cleats for kids, so we got to hand them out,” he said.

Today, Estelle has yet to enlist, according to officials, and Alden has moved on to Officer Candidates School. He is preparing himself for a long career in the Army and is proud to keep helping it grow.

The following are military recruitment trends for fiscal year 2005, according to “Military Recruiting 2005,” a study by the National Priorities Project, a nonpartisan, nonprofit group that presents data dealing with the impact of federal spending across the nation: