The night of the C-section all explanations were beyond me. I was happy only to see a little smile on Bill’s face when I asked him if he had held Victoria. He nodded yes, knowing I could comprehend no more than that. A kind nurse named Melissa pushed my bed into the maternity ward. She and an orderly were discussing how to get me from my recovery bed to the maternity bed, and I offered to help. “I’ll just get up and sit on that bed,” I offered. They looked at me blankly. “No, dear,” the nurse said. “You’re not able to do that right now. We’ll figure it out.”

After they lifted me from one bed to the other, the nurse stayed in the room. She looked at me kindly. “Mrs. Ash,” she said, “you are a strong woman.” That is when I found out that strong women have no idea who they are.

It was a full day before I held Victoria. Thursday was to be the day of her baptism, which a hospital bereavement counselor recommended because it would be difficult after that to keep her body from decomposing. I was ready. I had looked at the picture of Victoria the counselor had given Bill so I knew what she looked like. Bill and I decided we would meet with Victoria separately, and then together. After that we would have the baptism with the two of us and my parents present. My mother-in-law, whose second baby had been stillborn, did not want to participate. Already it was clear that grieving had many ways to express itself, and I began to understand that everybody’s way was right.

I met with Victoria first. Without a word the counselor placed her heavy little body in my arms and then walked out, leaving the two of us alone. I was thrilled to see her and felt such satisfaction at holding her body. “Oh, look at my brave little girl,” I said. “Aren’t you pretty? Oh, I knew you’d be pretty, Victoria. You were so brave to fight that infection, my little Piccolina. How could you have won? Mommy is forty and healthy and she still can’t fight this. How could you have won? I’m sure you put up a good fight, though, didn’t you?”

I brushed my finger against Victoria’s cold, soft skin and her crimson lips, the only signs that she was dead, and I brought her up to my face and smelled her. The staff had powdered her up so much, she smelled alive. Her face was pink and vibrant, even hearty. If only she would open her eyes. The nurses had dressed her in a diaper and white shirt. On her head was a white knit cap with a pink, blue and white pompom on top.

Cradling her close to me, I whispered, “You remember, Victoria, you remember if you can, that Mommy loves you very much. We’ve been talking to each other for a long time now, haven’t we, sweetie? Why don’t we just keep doing that?”

Then I sat and rocked her, as mothers do. After a time, I had the most perfect moment of my life: I simply kissed her cheek. As I did, my heart filled. All these nine months, all the planning, all the anxiety and the joy and the love, had led to a perfect kiss. I knew she was in the room watching. Victoria was there. 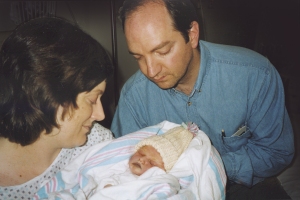 Victoria Helen Ash with her parents, Lorraine and Bill Ash.

Then Bill joined me, and held Victoria. As he held his daughter he began to talk to her with the tender voice of a new father. “Hi, Sweetlet,” he said. “It’s me, Dad.” But he could not finish the rest of the fun little speech he had recited to her so many times when she was in utero. He could not bring himself to say that he was the fun one, the one who was always right.

After we had 10 or 15 minutes alone with Victoria, my parents arrived and we all sat with her. My father said he could not get the story of Lazarus out of his head. “Why can’t she just rise up?” he asked. “That’d be challenging God and you can’t do that, but why can’t she just rise up?” I did not know, but it was a fine question. A nun and the bereavement counselor came in next. As my mother held Victoria, the nun put a white and red bib on my daughter. “I baptize you,” it said. The nun recited prayers over her and made the sign of the cross, in water, over her forehead, welcoming her into the Christian community. I don’t know what the nun said. Rote prayers from a very old ritual, but I was proud of Victoria then and told her inwardly she would always be a part of this family who loved her so much. Mostly, I used these few minutes to look at her. I did not know if I would see her again, ever again, and I wanted to memorize everything about her.

What hands, I thought, what exquisite hands. Victoria held them over her heart, one below the other, with such grace. I saw her resemblance to me and I thought, No one in the world will ever look like she looks. I wondered if my mother saw the resemblance. I did not ask, though, because I was afraid my mother would say yes and that would have been unbearable. I watched as my mother handed my baby back to the bereavement counselor, as the counselor nestled Victoria gently amid the blankets in the wheeled hospital cart, as the cart moved out of the room. I knew I never would see her again. There was nothing the staff could do to stop the rapid decomposition of her body after that. The process, they said, already had begun, which is why I did not unwrap my baby from her clothes. I did not want to see that. I wanted to see her whole.

After Victoria was taken away, it was as if the light had left the room. I cried. My father sat on the bed next to my chair and thanked the nun for performing the baptism. The nun looked at me and shook her head. She said something about never being the same again.

“My daughter is a writer,” my father told her. “She’s written for years. She’s written some plays.” The nun looked at him as if to ask what that had to do with anything. He went on. “If you read them, you’d know the kind of spirit she has. She has some spirit, Sister. My daughter is going to be all right.” The words had power for me. Everything my father had ever said to me was true.

Through all this time I held the big metaphysical questions at bay although they were growing inside my heart. Why? Tell me why. It was impossible to grieve my child and contemplate the mysteries of the universe. One thing at a time, I told myself. Once the trauma itself has passed I can carry on with the spiritual exploration. Yet, I knew even then, the effects of Victoria's death would be a crater in the landscape of my life.