This article originally appeared in the January 16, 2011 (Morris County NJ) Daily Record and on the Daily Record web site.

From decoding health risks to guiding treatment, our genes might tell all

Andrew Duke of Pine Brook had all he needed to find out his susceptibility to some 60 inherited conditions: saliva and a thousand bucks. The 50-year-old entrepreneur learned from his Genome-Wide Association Studies, or GWAS, test that he has an increased genetic risk for glaucoma.

“Doesn’t mean I’m going to have glaucoma,” he said. “But I went to the eye doctor for the first time in 50 years.”

Duke — whose GWAS would have cost him $1 million only four years ago — will remain vigilant. The pressure inside his eye can be lowered at the first sign of optic nerve damage.

Fast forward to a potential future in which a baby genetically tests positive for glaucoma. A doctor might be able to correct the metabolic pathway that causes the nerve damage before it occurs and prevent the disease.

Today personalized medicine is helping patients like Duke in a prognostic way by heralding potential diseases. But genetic tests also can help “theranostically” when they reveal which medications a body will process well, given its DNA sequencing. The advancement is significant, considering adverse drug reactions kill 100,000 American patients a year and injure 2.2 million others, according to the American Journal of Public Health. 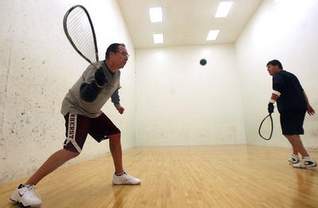 Andrew Duke, president of Metrographics in Fairfield, (left) plays an early-morning game of racquetball with Scott McKay of Wayne at 3 Cubed Athletic Center in Fairfield. Duke, of Pine Brook, got a Genome-Wide Association Studies test after his 50th birthday to find what his genetic proclivity might be to some 60 conditions.

Since the DNA of organisms also can be scanned — and matched with a library of sequences — genetic tests are useful diagnostically. They quickly can identify many foreign agents, such as viruses and cancers, that invade the body’s cells.

Though the benefits are clear, some scientific and legal experts also call for a healthy dose of skepticism about genomics, calling it an emerging and complex field with implications that reach into issues of privacy and insurance.

Such is the climate in which Atlantic Health recently opened its Personalized Medicine at Atlantic Health program, a web portal designed to help patients and doctors learn about the many specialized individual genetic tests available through Morristown Memorial and Overlook hospitals. A SNP test — short for single nucleotide polymorphisms — reveals whether a person has a particular condition, is a carrier for it or is susceptible to it.

A host of prenatal genetic tests also are available, as well as many to gauge individual sensitivity to a variety of different drugs. One example of a drug test involves Plavix, a popular anti-platelet medication given to every patient who gets a coronary stent.

“In patients with heart disease, we can do tests to determine whether they can metabolize Plavix,” said Dr. Craig Dise, chairman of the pathology department at Atlantic Health. “Why? Because after you stent the coronary artery, you want to keep the platelets from clogging up the stent.”

The web portal includes questionnaires and, if desired, access to an online genetics counselor.

“We’re not promoting that more genetic tests should be made available. We’re not trying to have people order tests they don’t need,” said Dr. Arnold Pallay, a primary care physician and director of Personalized Medicine at Atlantic Health. “We’re promoting tests to be made available to the right people for the right condition with the right heredity.”

The portal, Pallay said, is the only website of its kind east of the Mississippi River. Its ultimate goal, he added, is to help people make better choices for their health using a single test that a patient needs to take once in a lifetime.

Currently, the number of Americans who get genetic testing is not overwhelming. In a 2008 survey by the Genetics and Public Policy Center at the Johns Hopkins Berman Institute of Bioethics, only 5 percent of a representative sample of 4,659 Americans said they’d ever had a genetic test.

To test or not to test: It’s a question people ask themselves more and more as genetic testing becomes accessible through programs such as Personalized Medicine at Atlantic Health, or from direct-to-consumer companies like 23andMe, Navigenics, deCODE Genetics and Pathway Genomics.

On the one hand, 30 percent of how people age has to do with their genes, while the other 70 percent has to do with lifestyle choices and quality of health care, according to the Mount Sinai School of Medicine.

On the other hand, there are some populations, such as adoptees, for which genetic testing is the only way to glimpse their “biological background,” according to Kevin Davies, author of “The $1,000 Genome” (Free Press, $26).

But in the scientific world of professor and researcher Leonid Kruglyak, and his colleagues at Princeton University’s Lewis-Sigler Institute for Integrative Genomics, different questions abound about the current prognostic value of genetic testing.

When completed in 2003, the global Human Genome Project identified 20,000 to 25,000 genes and found that each can do many jobs, not all of which are known.

“The more sophisticated genetic tests these days, like the GWAS studies, incorporate as many of the variants in the genes that are actually known,” Kruglyak said. “But it’s still true that all these variants put together in most cases are explaining only a very small fraction of the overall risk. For any given individual, the predictive value (for disease) is quite low.”

Consider someone who is told the baseline risk of Type 2 diabetes in his age group is 6 percent, Kruglyak explained. A GWAS probably will tell that person his risk is 8 percent or 5 percent.

“Then you have to ask, ‘Is that information valuable?’ ” he said. “Even among the scientists who study this stuff there is widespread disagreement as to whether they themselves would take the test or find it useful or do anything differently based on the report.”

Certain tests are greatly predictive, though, he said, including proclivity for Huntington’s disease and cystic fibrosis as well as Alzheimer’s disease. Someone who carries one copy of the ApoE4 version of the ApoE gene has a threefold to fourfold increase in the risk for Alzheimer’s. Someone who carries two copies has a risk 12 to 15 times that of the average population.

The value of that information is dubious, many say, because there is no known cure for Alzheimer’s disease, though an ApoE gene carrier may want to buy long-term care insurance, for example.

However, that gene carrier might not be able to buy any, according to Maxwell Mehlman, director of the Law-Medicine Center at Case Western Reserve University School of Law and co-author of “Access to the Genome” (Georgetown University Press, $16.95).

The much ballyhooed Genetic Information Nondiscrimination Act of 2008, known as GINA, prohibits discrimination by employers and health insurers on the basis of genetic test results, but contains a great loophole that’s often overlooked, according to Mehlman.

“If your results reveal that you actually have a genetic disorder, then GINA doesn’t protect you at all with a health insurer,” he said. “It only protects you if you have information about a risk for a genetic disorder.”

“The company would simply say, ‘OK, you want us to insure you? Give permission for us to access your medical records,’ ” Mehlman explained.

George McDougall, principal and U.S. health sciences leader at PricewaterhouseCoopers, an accounting and business consulting firm, predicts genomics in medicine will lead to subclassifications of disease. Scientists probably will discover breast cancer is really 15 diseases, he hypothesized, and Alzheimer’s is actually a multitude of different diseases.

But for the human race to gain the most it can from genomics, it must merge with other fields, such as proteomics and metabolomics, according to Marianna Tcherpakov, a market analyst for BCC Research who holds a doctorate in molecular neurobiology. Together, the studies of genes, proteins, sugars and other metabolites may yield a new body of medicine, perhaps “system biology.”

“People are definitely starting to think about it,” Tcherpakov said. “Disease is too complicated to say one gene is responsible or one protein is responsible. It’s not true.”

In the meantime, though, Arthur Shechtman of Pine Brook, a 68-year-old retired attorney, had a SNP to help figure out why his blood platelet counts kept rising a bit for the last few years. He had no symptoms.

The result: He discovered he had JAK2 disorder, a genetic condition that causes the body to produce too many blood cells. Now he has a hematologist and takes hydroxyurea to drop his platelet count.

“To test for this normally, they’d have to do a bone marrow test, which is not pleasant,” Shechtman said. “Because I had the results of this genetic test, the doctor didn’t think a bone marrow test would be necessary.”

He and his doctor are hoping the medication will work. But in the meantime he feels good about his treatment because he has knowledge and something to try.