This article originally appeared in the March 14, 2010 (Morris County NJ) Daily Record and on the Daily Record web site.

MORRIS COUNTY — Even in flush economic times it’s difficult to make money in the building business. Only 43 percent of construction companies survive to see their fifth year, according to the U.S. Bureau of Labor Statistics.

A recession such as this one worsens the odds, according to Morris County homebuilders and commercial contractors. It stops the musical-chairs process of acquiring property, making deals and creating and selling buildings, leaving developers in tough spots. They are left holding land for which they can’t get loan money to develop, or are stuck with space fearful potential customers don’t buy.

The pause in commerce has been so long now that builders here and statewide worry whether they can hang on until confidence and credit return.

“Even in good times building is not completely under your control,” said Denise Dersin, editor in chief of Builder magazine. “It’s dependent on a vast number of variables. You can’t even control the conditions under which you create your product and are at the mercy of the weather.”

There are other typical obstacles to success. Deals require complicated contractual arrangements that make them vulnerable to breaking down, said Dr. Wayne Eastman, a Rutgers Business School professor. And in New Jersey, environmental regulations can delay projects up to two years, according to Tom Olenik, engineering consultant and NJIT professor.

But a sustained economic downturn adds another challenge into the mix: carrying the expenses of doing business while making little to no income.

“Most contractors today are losing money and it’s certainly not a sustainable situation,” said Ken Simonson, chief economist for The Associated General Contractors of America. Last year some were kept busy with projects already in their pipeline. But now that work has finished or vanished and new orders are not coming in.

“Later this year I think we’ll see a large number of companies going out of business,” he added. 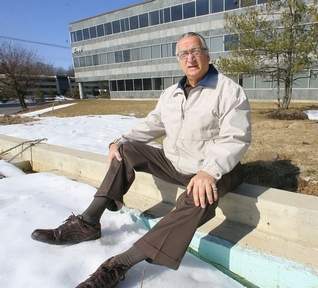 Carl Cerbone, owner of Cerdel Construction, sits at the foundation of an 8.77 acre property he owns on Route 10 in Parsippany. One hundred sixty-eight thousand cars pass by the site every day, he says, but the banks won’t loan him the money he needs to build an office building there. (Staff photo: John Bell)

What is a builder to do? That’s a question Carl Cerbone of Cerdel Construction in Parsippany has been asking himself. For the time being, he has reduced his operation to doing “very specific jobs,” but he could use a loan to build on an 8.77-acre parcel he owns on Route 10 West in Parsippany. A total of 168,000 cars a day drive by the lot, he said.

“But banks won’t finance a new office building,” he said. “The construction business is almost at a standstill.”

“The first week of February was disgusting,” Cerbone said. “The taxes came due on the various parcels of land we own. We always pay our bills on time but the smoke was coming out of my ears.”

Initial recovery for the industry will start in a few months, according to Jim Haughey, chief economist for Reed Construction Data. Last year in New Jersey, $8 billion was spent on residential, commercial and government construction projects. To date, contracts totalling $10.9 billion have been signed for 2010 and $9.6 billion for 2011.

But at the moment, very few construction loan requests are “in the queue,” according to Thomas Shara, president and chief executive officer at Lakeland Bank, which has advertised its commitment to lending to local businesses during the recession.

“Developers are being disciplined,” Shara said. “It doesn’t make economic sense to build a house next to a subdivision that has a lot of vacancies or ‘for sale’ properties. It’s very difficult to compete on price.”

While some local developers acknowledge the value of President Barack Obama’s stimulus package, they say it doesn’t help them since the money mostly was funneled into road construction and large projects.

Anthony Mazzola, owner of Mazzola’s General Contracting in Rockaway, stands in his empty shop. Mazzola’s business had 11 employees 18 months ago. The staff is now down to three. New Jersey lost 21,800 construction jobs between December of 2008 and December 2009. (Staff photo: Dawn Benko)

Unable to increase their top lines, some Morris builders are cutting their bottom lines to ride out the slump. Among them is Anthony Mazzola of Mazzola’s General Contracting in Rockaway Borough. The company primarily works on residential projects but also does commercial work. Eighteen months ago, 11 men worked for Mazzola. Now he has three. (New Jersey lost 21,800 construction jobs from December 2008 to December 2009, according to the AGC.)

“We’re not making money,” Mazzola said. “We’re now working on two very small residential renovation projects. Normally, I’d have three to five jobs going, depending on distance and the size of the project.”

Even as things seem as bad as they can get, the federal Producer Price Index shows the price of materials bottomed out last spring and will continue to rise: The price of Sheetrock is going up 20 percent this month, diesel fuel is up 35 percent from a year ago, and rising copper futures prices portend more expensive wire and pipe, experts say.

Yet there is movement in some areas of the development world. Dersin said houses are selling at either end of the market. First-time buyers, who don’t have to worry about selling a home, are taking advantage of the federal $8,000 new homebuyer tax credit.

In Chester, Barry Salmon of Salmon Construction Services said he has been building multi-million homes for clients who realize now is a great time to build.

“It’s 20 to 25 percent less expensive for me to build a project now than it was three years ago,” he said.

Mazzola noted a lot of building owners who are losing tenants are using the opportunity to upgrade their buildings.

“I have some bids out on work like that,” he said.

Dersin said the recession is a reminder of a truth the last big building boom seemed to obscure: Building is a cyclical business.