This article originally appeared in the uly 18, 2010 (Morris County NJ) Daily Record and on the Daily Record web site.

David Zaback is the quintessential young New Jersey farmer. He’s 28, holds an irrelevant degree in anthropology and comes from a family with no agricultural experience.

Yet this spring Zaback is cultivating 18 leased acres of organic produce on his new Z Food Farm in Lawrenceville. “A switch flipped in college,” said the affable Zaback, taking a short break from working his fields with his staff — an hourly worker and two interns. “I was exposed to different ideas. I tried different foods. I volunteered on a farm.”

Then for three years he interned at Cherry Grove Organic Farm, also in Lawrenceville, and for three more he managed Gravity Hill Farm in Titusville. In so doing, he entered a community that believes in sustainable farming. They share a dream of local food and a self-determined life connected to the land — a dream reflected in the rise of small farms across the nation.

“Farmland is expensive in New Jersey,” said Judith Robinson, marketing manager for the Princeton Farmers’ Market, “but young people are coming up with creative ways to farm.”

In some cases that creativity includes farming with old-time technology, including draft horses.

In 2008 this phenomenon so fascinated 27-year-old environmental journalist Jared Flesher, a Flemington native, that he interned at Howell Living History Farm in Lambertville. By day Flesher worked the farm with his peers — Tom Paduano, Matt Schofield and Aubrey Yarbrough. By night he recorded his experiences in Farmbedded, a blog.

In 2009 Flesher bought an HD Canon Vixia HF S100 and started filming “The Farmer and the Horse,” a documentary focusing on his three peers at Howell Living History Farm. Then he followed one of them, Paduano, to Charles Napravnik’s organic Asbury Village Farm in Warren County.

“Charles was especially interesting to me because he is growing vegetables using draft horses and running a real working CSA (community supported agriculture) farm,” said Flesher, referring to farmers who sell shares of their yield directly to individuals.

New farmers are not necessarily deciding whether farming with tractors or animals is best, Flesher explained. Some like using both.

“It’s a matter of realizing that the more kinds of power you have on the farm,” he said, “the more diversified your farming operation is.”

For instance, Rob Kibbe, longtime farmer and foreman at Fosterfields Living Historical Farm in Morris Township, finds plowing pleasurable with a horse but prefers disking with a tractor.

“When it comes to smoothing out the soil and making a nice seed bed, I’d just as soon use the tractor,” Kibbe said. “We plant with our horses, too, but with a tractor you can hold a straight row.” 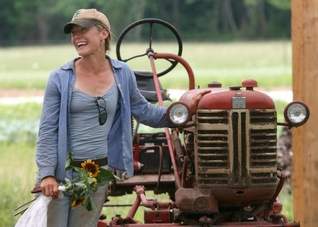 Farming is all in the family for Jess Niederer, owner of Chickadee Creek Farm in Pennington. (Staff photo: Karen Mancinelli)

Like Kibbe, 26-year-old Jess Niederer has farming in her blood. This year she leased a six-acre field in Pennington from her father, a conventional hay farmer, to start Chickadee Creek Farm, a transitional organic farm growing vegetables, herbs and flowers. Her degree in natural resources management is helpful, but even moreso is the counsel of Jim Kinsel, farm manager at Honey Brook Organic Farm in Pennington, where Niederer interned for two years.

“I put in dirt time with Jim for this exchange,” Niederer said. “It’s great to be able to ask him: Is it time to take the covers off the melons? Is the tomato blight going to come back this year?”

Without the family land, she can’t imagine how she’d be farming. She started with a $30,000 loan and has brought in $7,000 from sales at markets and to The Brothers Moon restaurant in Hopewell Borough.

These days 28-year-old Yarbrough, featured in the film, labors happily at Cherry Grove Organic Farm using tractors. When she worked in her pre-farming days for the American Red Cross, she would look wistfully out the window of her Cairo office.

“I felt I was living inside all day,” she said. “The sun would rise and set and seasons would change but I wasn’t a part of it.”