This article originally appeared in the November 29, 2010 (Morris County NJ) Daily Record and on the Daily Record web site.

Second of two parts: Belief in God, not religion

The fastest-growing faith group in America believes having a relationship with God does not require practicing a religion.

And 86 percent of Morris County residents in that group — “spiritual but not religious” — agree, according to “What do you believe,” the Daily Record’s informal survey on faith.

For hundreds of years, this group has been pushing the American envelope on exactly what God means and, for that matter, the nature of the divine/human relationship. It’s the group that always has mixed beliefs and entertained new thinking to fashion a personal spiritual experience.

As science starts intersecting spiritual life in the 21st century, spiritual but religious people certainly aren’t stopping now. In fact, their ranks have risen from 24 to 30 percent of Americans from 2005 to 2009, according to The Pew Forum on Religion and Public Life, a nine-year-old nonpartisan fact tank that collects and analyzes data on the American religious experience.

Reiki Master Jon Rosenberg holds his hands close the head of his wife Lisa to a treatment designed to release a person's energy. (Alex Lewis, Special to the Daily Record)

Daily Record survey-taker Jon Rosenberg of Rockaway Township was raised in a Jewish Conservative home. Now he attends shaman circles and is a master of Reiki, a type of life force energy healing he uses to help people manage stress and pain. Rosenberg does not read any holy texts.

“I believe in a higher power that is the source of life,” said Rosenberg, 41. “You don’t need a middleman between you and the higher power.”

Instead, he works directly with his “spirit guides,” he explained, a practice he started when he learned Reiki.

The Daily Record spiritual but not religious survey-takers — numbering 136 out of 1,075 — unsurprisingly scored low in terms of traditional beliefs: 35 percent believe in heaven, and 8 percent believe holy texts come directly from God. But that doesn’t mean they won’t ever be found in a traditional house of worship.

Survey-taker Joseph Keyes of Long Valley, for instance, calls himself a “wedding, funeral and baptism Catholic.”

It was a tai chi class he took 15 years ago — as well as the subsequent reading of “Siddhartha” by Hermann Hesse and a three-day retreat at a zen monastery — that got him and his wife sitting zazen at home.

“I firmly believe in God,” said Keyes, 60. “There aren’t any doubts in my mind. But I’ve got to warn you, it’s not the God we learned about in catechism. I went to Assumption School in Morristown, and they put the fear of God into you, all right.

“Now, to me, God is not the big benevolent being who pulls strings and controls us. It’s more like a participatory thing.”

This seeking and weaving of traditions and new and alternative thoughts dates back to the Colonial era. At the time of the American Revolution, 15 percent of Americans belonged to churches, according to Robert C. Fuller, one of the nation’s leading religion scholars and author of “Spiritual but not Religious: Understanding Unchurched America.”

Back in those days, religion preached an impassable divide between God and man, according to Fuller. Average people, however, were interested in a direct relationship with God that might help them control their fates in a strange new world. Their interest lead to rampant experimentation with astrology, alchemy, witchcraft, Rosicrucianism (a study of ancient esoteric philosophies), and many spiritualities with mystical and Native American elements.

During the Enlightenment — which shaped the thinking of the country’s Founding Fathers — it was mainly the unchurched who integrated the new thoughts into the mix of their personalized beliefs. But the ideas also spread to church-goers, who often used them to supplement their religious lives.

And so it has been through the timetable of American history, Fuller writes, as the Freemasons, the Transcendentalists and the metaphysicists blossomed, and then alternative healing methods, popular psychologies and the New Thought movements.

The growing American spiritual but not religious population today is helping to forge yet a new era of consciousness, according to George Lewis, founder of the Florida-based Spiritual Broadcasting Network and host of the Spiritual But Not Religious Internet television show.

“Science is giving us information we just didn’t know before,” Lewis said. “With that new information, new stories and myths start to form.”

They are stories that explore the role of consciousness in eternal life, healing and personal transformation, according to Lewis.

“Science is telling us that everything, including us, is energy,” he said. “You can’t destroy energy so we can’t be destroyed.”

Additionally, the work of thinkers who are bridging science and spirituality — such as cell biologist Bruce Lipton, author of “The Biology of Belief,” and investigative journalist Lynne McTaggart, author of “The Field” — have advanced the understanding of human potential in recent years.

The spiritual but not religious movement is leaderless and not about organizing large groups, Lewis pointed out. Rather, it comprises people individually embracing and living the new belief systems they want in the world.

“If you want to see how effective this leaderless model is,” he said, “look at how 12-step programs work. They’re huge, but they’re leaderless.”

Some spiritual but not religious people work in alternative healing fields that mix body and soul. Inherent to their work is a view of God as a kind of electricity that animates everything and everyone and can be used as a healing agent. 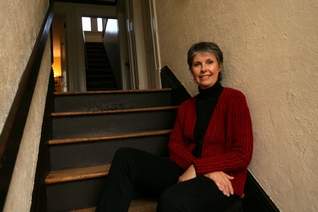 Barbara Lowry of Mountain Lakes, a homeopathic practitioner, is an example. Raised Congregationalist, she now attends services at the Center for Spiritual Living in Morristown, a Science of Mind community.

“Science of Mind is cool because it encompasses the teachings of all the different world religions, according to Ernest Holmes,” said Lowry, 60. “What a bright man. He was able to see the threads that run through all of it and say, This is what works. He has the Law of Attraction in there, too, because you change energy with your consciousness.

“If you direct your thought, you can change your reality and the reality around you. You don’t have to believe anything. It just is.”

The Rev. Frankie Timmers, minister and spiritual director of the Center for Spiritual Living in Morristown, said the church attracts people who are in some way discontented with Judeo-Christian traditions even though they also still may continue to attend services in those traditional religions.

They come, she said, seeking practical relevant ways to live lovingly in the world.

“What I’ve discovered is that we have lots of new faces all the time, but people aren’t diving in,” she said. “They’re tasting, like from a smorgasbord. We have a lot of people but not many who are really committed.”

Bill Hungerford of Denville is co-president of the Association for Higher Awareness, a Morristown-based group that hosts a variety of speakers who explore consciousness through many lenses and traditions.

Having had a strict Presbyterian upbringing, Hungerford’s philosophy now epitomizes the spirit of unchurched America — to never settle on any one thing, to always learn and to look within the self to find God.

“Religions teach us self condemnation and have created a very sad and serious earth,” he said.

He believes the world would be a better place with less belief because the more people believe, the less they inquire.