This article originally appeared in the June 21, 2009 (Morris County NJ) Daily Record and on the Daily Record web site.

From the top of the world to Wharton

Nima Sherpa prepared hazelnut coffee in the kitchen of his small Wharton home, a string of Tibetan prayers flags visible through the window over the sink. The scene is a microcosm of his life, half Nepalese, half American.

“You go where life takes you,” said the 44-year-old father of two. In his case, the currents of circumstances took him across the world and a huge cultural divide. 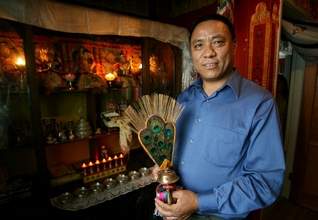 Nima Sherpa holds a receptacle for holy water in a room in his Wharton home dedicated to prayer.

One room away is the family’s Buddhist prayer room, exactly the kind Sherpa grew up with in Khumjung, a village in northeast Nepal in the Himalayas 12,475 feet above sea level. He was born into the Sherpa tribe, known in the West for guiding people up Mount Everest. He grew up speaking Sherpa, a language for which there is no written language.

Now Sherpa — everyone in the tribe bears the same surname — works in IT for a nonprofit with 14 offices and owns his own business. How did he wind up living in Morris County? What a story. To call this man industrious is the understatement of the century.

Sherpa, whose mother died soon after he was born, learned to read and write Nepalese and English at a grade school in his village, one of 17 built by Sir Edmund Hillary, the New Zealander who in May 1953 reached Everest’s peak, the highest in the world at 29,028 feet.

Starting at age 9, Sherpa worked in various servant capacities for neighbors in his village.

“I would take care of the cattle and do other things,” he said. Until he turned 13, when, following the lead of his brothers, he started working as a porter on the 10- to 15-member teams that escort tourists on treks to the Everest Base Camp. His job was simple but not easy: He carried luggage.

Diligently Sherpa worked his way up on the team, becoming the spare boy who carries and prepares lunch, the kitchen boy who carries pots and utensils, then the sherpa who assists those with problems and sets up tents. Finally, he qualified for the top spot — tour guide, the leader who coordinates all aspects of the trip.

But at 16, Sherpa left Khumjung and, all by himself, moved to Kathmandu, capital of Nepal. Not even that westward trip was easy.

“It required 10 days of walking followed by a 200-kilometer bus ride,” he said.

For the next six years, Sherpa led treks in-season, deciding to go as far as the base camp and not climb farther up the mountain.

“My brother died in an avalanche,” he said, “and I asked myself then, ‘Is this worth it?’ ”

Off-season he took part-time lessons in English and Japanese at trade schools. For a sherpa, the more languages, the better. Tour guides need to converse with people from all over the globe. Sherpa earned $5 to $10 daily. Life was good.

One day, though, the group he guided to the base camp — at 17,600 feet — included the director of the private Lincoln School in Kathmandu, who offered Sherpa a full-time job at the school organizing tours of the region for the students, mostly the children of diplomats. In 1987, Sherpa started the job. Life was even better.

“My life was whole just as it was,” he recalled.

During the summer break of 1989, Sherpa received a six-month visa to visit a friend in Seattle, where he got his first taste of the west. He took a cross-country bus trip to Manhattan, then to Boston, and was charmed by 24-hour electrical power, skyscrapers and road signs with reflectors that could be seen at night as clearly in the day. As late as the 1980s, people in Sherpa’s village — and Sherpa himself — ran 10 miles to collect wood to cook.

In 1990 he returned to Kathmandu and hunkered down for the next three years, continuing his work at the Lincoln School. Then he decided to take a chance. A big chance.

In 1993, Sherpa bought a plane ticket on credit and returned to the United States, taking up the invitation of local surgeon Walter McConnell and his wife to live rent free for a time in Wharton. He loaded boxes for UPS (piece of cake after Mount Everest) and eventually supervised a night shift at a department store. Then he was a warehouse clerk.

After six years of private tutoring, Sherpa learned past tense from future tense, nailed the basics of American history and came to understand that Santa Claus was not an American god. He earned his GED and learned that with language skills — his English is excellent — comes confidence.

When laid off from the warehouse job, he attended Chubb Institute and graduated in 1999 with a computer certificate and became a Microsoft Certified Professional Technician. Today he runs Sherpa Computer Services, his own business, in addition to working his full-time job.

“It gives me pride to work in a corporate office building and walk through the same revolving doors with the CEOs and people with degrees,” Sherpa said.

But that’s not all. Sherpa also freelances with Fantasy Productions in Long Valley. He works the systems, runs the board, queues up songs and loads and unloads equipment for owner Bob Albrecht.

“Nima’s work ethic blows me away,” Albrecht said. “He has an owner’s mentality. He treats every job as if he owns the company.”

Sherpa misses some aspects of Nepal. He misses mountains and would like to take his family to Colorado on vacation. He misses relaxing, too, because in America there is mostly rushing. But, boy, Nima Sherpa loves his life here.

He and his wife, Lhakpa Kanchi Sherpa, also Buddhist, were married in a Presbyterian church. When she returns home from work each day, she cooks mostly traditional meals of rice, vegetables and meat with light curries for the family. But the family also enjoys barbecues and pasta.

Sherpa cannot read the Nepalese in the prayer books placed carefully among the Buddha statues in his prayer room. But he and Lhakpa keep that room immaculate. When his children were born, he called home and, in traditional style, had a reincarnated monk name them — Dolma and Tenzing.

Sherpa dreams about buying a house for his children that’s not on a main street, and he thinks a lot about what success means. A fancy house and a million dollars would be nice, he said, but not if those things weigh down his mind. Not if they leave him with no time to pray.

Praying helps him keep a positive mind, which is what brought him this far, said Sherpa, who calls himself “a man from nowhere.” Only not really. He comes from the highest place in the world and is still climbing the highest summits in himself.

More information about Nima Sherpa is available by visiting www.sherpa1.com or by writing to info@sherpa1.com.