This article originally appeared in the May 15, 2008 (Morris County NJ) Daily Record and on the Daily Record web site.

Reisman looks forward to sharing his experiences back on Earth

This look at Parsippany was taken by astronaut Garrett Reisman from the International Space Station. Reisman, a native of the township, is looking forward to talking about his voyage on Earth. 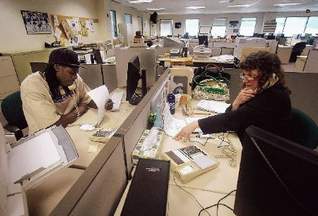 Daily Record features writer Lorraine Ash, right, and IT coordinator Derrick Aiken talk with NASA as they prepare to interview astronaut Garrett Reisman by phone. He sent greetings to his onetime home — Parsippany. ‘I would like to let everybody know that I finally managed to take a photograph of Parsippany from space. As far as I know, it’s the only photograph in existence taken from space of Parsippany — by a human being, anyway — so I’m proud of that.’ 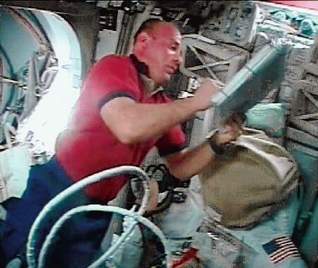 In this image from NASA TV, mission specialist Garrett Reisman works in the airlock of the international space station on March 13. 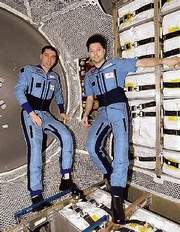 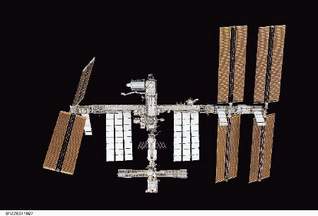 Backdropped by the blackness of space, the International Space Station is seen from the Space Shuttle Atlantis as the two spacecraft begin their relative separation. Earlier, the STS-122 and Expedition 16 crews concluded almost nine days of cooperative work onboard the shuttle and station. Undocking of the two spacecraft occurred at 4:24 a.m. on Feb. 18.

Astronaut and Parsippany native Garrett Reisman extended greetings to Morris County from the International Space Station on Tuesday during an in-orbit interview with the Daily Record.

“I would like to let everybody know that the other day I finally managed to take a photograph of Parsippany from space,” said Reisman, a flight engineer. “As far as I know, it’s the only photograph in existence taken from space of Parsippany — by a human being, anyway — so I’m proud of that.

“When I took that photo — I took it with a very powerful lens — I could see everybody down there is looking great,” he joked.

While the photograph, which we later obtained through e-mail via NASA TV, certainly shows no people, it zooms in close enough on bodies of water and roads that they are distinguishable.

“They all did a fantastic job, and I’m looking forward to coming back and sharing these experiences with everybody back home,” he said.

Reisman is part of Expedition 17 on the station, an orbiting research facility under construction some 217 miles above the Earth. He now is flying with cosmonauts Oleg Kononenko, 43, a flight engineer, and commander Sergei Volkov, 35. Volkov is the first second-generation cosmonaut; his father, Alexander Volkov, was in space when the Soviet Union dissolved in 1991.

All three men are on their first space flight.

On Tuesday, Kononenko said that during the very little time the crew is not working, they like to “make an interesting picture of the Earth and watch the weather over the different countries and continents. The view is always changeable.”

Though it may sound strange, Reisman added, the three friends, who have trained together for the past eight years, do not get to sit, talk and enjoy each other’s company, except for a little time over lunch and dinner.

While the two cosmonauts will remain at the station into the fall, Reisman is scheduled to return to Earth on the space shuttle Discovery, due to launch at the end of the month. Not that he’s in any hurry, he said.

“You never can know exactly,” Reisman said. “There may be a weather delay. When you’re a long-duration crew member, you have to be mentally prepared for any length of time, really. Although the calendar says I’ll be coming home soon, I’m trying to not get my hopes too high for that. The truth is, I’m having so much fun up here, and there’s still so much stuff I’d like to do, that I’m in no big rush, anyway.”

What he misses most about life on Earth: His wife, Simone.