Not Alone in Their Grief 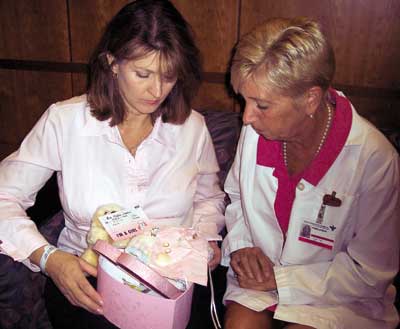 Nurses make a difference as parents suffer the heartbreak of a stillborn child.

Stillbirth is a topic that most people don’t want to talk about. Yet once the subject is brought up, many seem to know someone who has been affected by a stillbirth or has experienced one firsthand.

Pam Magi, RN, labor and delivery nurse and coordinator of perinatal bereavement, Good Samaritan Hospital, Suffern, N.Y., witnessed a stillbirth early in her nursing career. “I’ll never forget it,” she said. “It was a life-altering experience that began after I was unsuccessful in finding a newborn’s heartbeat. It led me to educate myself and become actively involved in stillbirth bereavement.”

And to this day, she is still learning and involved. “All of the knowledge I’ve gained has come from the parents; I truly believe it couldn’t have come from books. The parents are my teachers,” Magi says.

She also says that it’s the labor and delivery nurses who are in a special position to help parents and families through this life-changing experience.

Reaching out to the mother

Nurses can make a difference from the moment the woman comes into the hospital. Some have learned the fetus has no heartbeat at a routine checkup or after going into labor. They are in complete shock, according to Magi, and the initial treatment they receive makes a tremendous difference. Nurses should tread lightly and compassionately, helping parents through all of the painful decisions they have to make.

Mothers should be given the option of moving off the maternity ward. For some it may be too painful to be around other mothers and healthy babies. Lorraine Ash, author of Life Touches Life: A Mother’s Story of Stillbirth and Healing, which details her experience with the loss of her daughter Victoria, opted to stay.

“I knew it would be difficult [to stay in the maternity ward], but I wanted to face it,” Ash explained. “But mothers should be given a choice.”

“We explain what the baby will look like so parents won’t be surprised.We encourage the mother to hold the infant and spend as much time as she wants with the child,” says Magi. “We’ve even had wakes in the labor room.”

Working with the family

Siblings and other family members are invited to hold and see the baby as well. Magi encourages parents to talk directly to their child about the hopes and dreams they had. Fathers are also encouraged to spend some special time alone with the infant, if they wish.

Good Samaritan provides baby clothes and blankets in place of hospital bedding and gowns. Baby rings, one for the mother and one for the father, are also given to parents as mementos. “We try to provide as many keepsakes as possible, such as a lock of the child’s hair, the hospital identification bracelet, foot- and handprints, and the baby clothes,” explains Magi.

The nurses use disposable cameras to take pictures of the family with their baby. If a family resists the idea, the nurse explains that they do not have to take the camera home. The camera is stored at the hospital and can be retrieved later. According to Magi, approximately 95% of parents return for the camera, which emphasizes the value of documenting the event as part of the healing process.

When a woman has had a cesarean section and is drowsy from anesthesia, nurses wait until she is fully awake and aware before introducing her to the child. And most important, according to Magi and Ash, is that nurses use the child’s given name whenever they speak to the parents about the baby.

Support from the group

Besides overwhelming grief, mothers may also experience a sense of blame. They feel that if they had done something differently, the child would have lived. Counseling and support are essential to help them and their families once they have left the hospital. Sometimes, this may be a young couple’s first experience with death.

“It is easy to get stuck in the moment, in that emotional spot,” explained Ash. “Parents need to get their emotions ‘moving’ again.”

“At Good Samaritan, we started with one group and had three people attend,” Magi said. It has since expanded, and there are currently four separate groups: One for those who have experienced a miscarriage; one for those who have had a stillbirth; one for parents who have experienced a stillbirth and are pregnant or trying to conceive again; a fourth group for women who terminated a pregnancy solely because medical issues severely compromised the health of the fetus.

The stillbirth support group meets once a month, and Magi encourages those who attend to talk with one another and develop a network outside of the group meetings. The women reinforce and validate each others’ emotions and offer support based on this mutual experience. Husbands are also encouraged to attend.

It’s a difficult time for the mother, the father, and the family, but with nurses there, ready to educate, comfort, and support them, they are not alone in their grief.

Heather Lewin is a freelance health care writer and editor.