This article originally appeared in the August 23, 2009 (Morris County NJ) Daily Record and on the Daily Record web site.

Fathers and sons work on lots of projects together, but there are few partnerships as unique as that of the Drs. O’Kane, two criminologists whose study — “Murder Murals: A Cultural Adaptation to Urban Violence” — recently was featured in the E-Bulletin of the International Sociological Association.

The son is James B. O’Kane, 40, of Morris Township, director of information technology risk analysis for a global financial services firm. The title means he stays a step ahead of hackers looking to defame important Web sites. 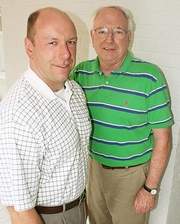 They may be intellectuals, but they’re certainly colorful, friendly ones accustomed to tough city streets. Which is why walking dangerous neighborhoods in the Bronx and Brooklyn didn’t faze them. There the duo found, photographed and studied neighborhood murals memorializing local drug dealers who met with violent deaths.

“Many, if not all, in the larger society believe our cities are best rid of these social pariahs plaguing the streets,” said the senior O’Kane, the son of Irish immigrants who grew up in the ’50s in the Bedford-Stuyvesant section of Brooklyn, where gangs were a way of life. “Don’t get me wrong. We don’t agree with what they did.”

One point of the project, though, is to show the public — and the world — that these murals, which originated in New York City and depict both criminals and innocent victims of street crime, actually are moving expressions of grief. They are healing places for the loved ones the deceased left behind.

“A person depicted on a wall mural may have been an awful criminal, but there’s another side to them — a human side,” said the senior O’Kane. “Anyone who sees these murals can’t help but be moved.”

Another goal of the study is to drive home the reality that all graffiti is not the same and should not be uniformly painted out.

Those living in drug-infested inner city neighborhoods rarely have the financial wherewithal to honor their loved ones with a funeral, said the senior O’Kane. So they do what they can. Rather, they did what they could.

For the 60 or so murals featured in the study were discovered by the O’Kanes in the late ’80s and early ’90s — the heyday of the senior O’Kane’s annual criminology student field trip to the 75th Precinct in Brooklyn. The idea was to move the students out of the world of theory and into the courts, jail cells and streets where crime thrives. 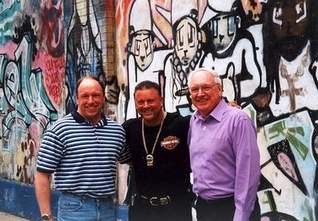 James O’Kane of Morris Township, Detective David Carbone of the Brooklyn North Homicide Task Force, and James O’Kane, sociology professor emeritus at Drew University, stand in front of one of the 60 “murder murals” they studied.

O’Kane introduced his students to his friend, Detective Dave Carbone, who became the duo’s third partner-in-crime study. Carbone, recently retired from the Brooklyn North Homicide Task Force, is the subject of the book, “The Making of a Detective.”

Later, when the younger O’Kane was working in the Bronx on his own crime control research for his doctorate in criminal justice at Rutgers University, he noticed murder murals there as well. As in Brooklyn, the murals in the Bronx were popular in Latino communities. He also saw them on the walls in African American communities.

That’s how the study began.

“These murals were put up at the height of the homicide rate in New York,” said the younger O’Kane. “In 1993 there were 2,300 homicides a year in New York City.”

In the late ’80s and early ’90s murder made lots of headlines: there were famous cases. One of the murals in the O’Kane/Carbone study showed victims of the Happy Land Social Club arson in the Bronx in March 1990. A total of 86 people were trapped in the building after a jealous boyfriend poured gasoline at the entrance and torched it. That doorway was the only means of escape.

The young O’Kane, the father of six, said one of the most moving Bronx murals he encountered was spray-painted in the Castle Hill Houses neighborhood in memory of Jessica Guzman, a 10-year-old girl killed by a livery-cab driver.

“It’s a large mural with a flaming heart with angel wings across a 40-foot wall,” he said.

The senior O’Kane said he’ll never forget standing in front of a Brooklyn murder mural that depicted seven people, all in the same gang, all murdered in the same year.

“Across the street from this wall were regular single wooden-frame houses,” he recalled. “A woman who lived there came out and was looking at us. The cops told me three of her sons were murdered. I never spoke to her. I don’t know what she thought. But it struck me, This really hits home.” 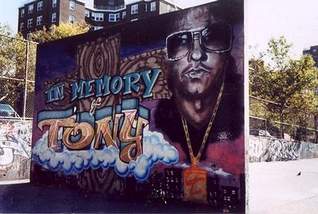 This murder mural, found by James B. O’Kane on a playground in a Watson Avenue housing project in the Bronx, honors the memory of a 19-year-old gang member who was shot in the head multiple times. His street name was Tony Montana, after the fictional drug lord portrayed by Al Pacino in the movie ‘Scarface.’ O’Kane said it was one of the most moving murals he found. ‘It’s quite artistic,’ he said, ‘and also depicts the reality that the price tag on life can be very low there.’

The murals the O’Kanes found and chronicled remain up to this day and never have been defaced, the younger O’Kane explained. But there are far fewer new ones for two reasons.

One, the homicide rate in the city went down after the crime clean-up campaign of former Mayor Rudy Giuliani and former Police Commissioner Bill Bratton. This year it may hit 500, according to the O’Kanes.

Two, the Internet is up and many inner-city households, no matter how poor, have a computer.

“Just like you can deface a wall, you can deface a Web site,” the younger O’Kane said. “There is an interesting parallel between electronic crime and street crime — this notion of marking up a surface.”

In a way, he added, the murder murals — some painted on walls as large as the block-long Chloe Foods plant in Brooklyn — can be seen as historical artifacts. The earliest graffiti was at the Lascaux caverns in France.

“Cave dwellings with hand prints,” he said. “People trying to be remembered in some way. It’s universal.”

Neither O’Kane is ready to let go of the murals just yet. Give them a grant and a couple of nice digital cameras and this duo will keep going.

“I’d like to go around the rest of the city and see if there are more of these,” said the senior O’Kane. “I’d also like to know if this is happening in other cities.”

Such as Los Angeles, his son added, where there are many Latino neighborhoods. He’d like to study if and how the phenomenon has migrated online.

If anyone carries through, it may be these two. After all, how many father-and-son criminology teams are out there?