This article originally appeared in the July 11, 2010 (Morris County NJ) Daily Record and on the Daily Record web site.

Program helping microbusinesses that cannot get funds from bank

Last fall Deborah Olivo returned to Randolph after being laid off from a job selling high-end art. Single and 53, she couldn’t fathom what to do next.

“I didn’t think I’d be in a position to start a business,” she said.

But Olivo did, with the help of lemongrass and a $5,000 loan from the 3-year-old New Jersey Women’s Micro-Business Credit Program, which has issued 29 such loans to date.

Hers is the only one so far to go to a new Morris County venture — VidaAire, which makes and sells a lemongrass-based essential oils spray originally created to relax Olivo’s neuromuscular therapy clients. 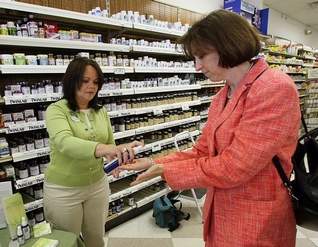 Olivo received her loan in January after taking the free prerequisitebusiness courses at the New Jersey Association of Women Business Owners Women’s Business Center, which administers the microloan program from its Chatham office. Today her product is in 30 stores in North Jersey, including Whole Foods Market.

Others like Olivo have been finding their way to the U.S. Small Business Administration center, which annually receives $150,000 in federal funds and, to date, some $100,000 in matching state funds.

“Right now we’re helping a goodly amount of folks who’ve been laid off and have decided they don’t want that to happen anymore,” said Penni Nafus of Chester, center director.

Microbusinesses are generally defined as having fewer than 10 employees, though the definition varies, according to Nafus.

The Challenger Job Market Index shows 8.6 percent of unemployed managers and executives started their own businesses last year, compared to 5.1 percent in 2008.

Boomers are bolstering the trend. Census self-employment figures for 2006 through 2008 show that all growth is in the 55-plus age group.

The NJAWBO women’s business center attracts some 5,000 participants a year, 9 percent of them men. (People can take the free classes without applying for a microloan.) But most are from South Jersey. In spite of the center’s Chatham location, only nine of the 252 people who have explored the microloan program are from Morris County.

“We even have a few clients from Gloucester County,” Nafus said. “It isn’t convenient for them, but they do it.”

Why? Nafus isn’t sure. But the center, one of 109 SBA centers nationwide, ranked top in the country last year for its innovations and programming. Also, people find the terms of the loans attractive: 3 percent interest, a half percent for veterans. On a full $5,000 loan, payback is $90 a month for five years.

An applicant’s credit score is not taken into account, according to Nafus, and her personal income can be as high as 350 percent above poverty level. 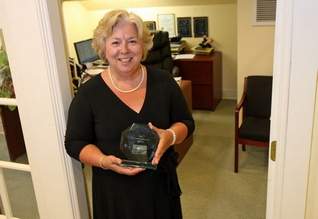 Penni Nafus of Chester is director of the Women's Business Center in Chatham. She is holding an award for running the best of 109 small Business Administration affiliated women centers in the U.S. (Staff photo: Karen Mancinelli)

Even a convicted felon may qualify, as long as she isn’t on parole or probation, Nafus said.

People on unemployment are eligible, too, which was Olivo’s saving grace.

“I was on unemployment and no way a bank would have loaned me money,” she said. “The microloan was a goldmine for me.”

But the classes were just as important. The first time Olivo set foot in the women’s business center, she thought she had just one product and a nameless one at that. For years she’d called it “my spray.” She didn’t know why would anyone would care about it.

“With Penni’s counseling I learned I had something that is of value to people,” Olivo said. “Who doesn’t want to live a greener, healthier life? Who isn’t thinking about what they’re breathing into their lungs and spraying in their homes?”

These days she gives demos of VidaAire spray — a mix of lemongrass, bergamot, lavender, tea tree and verbena oils — and sells them to health stores, plastic surgeons, funeral homes, chiropractor and dentist offices. Anywhere a relaxing,sanitizing, mood-elevating sniff can do some good, Olivo sees a market.

She also sells directly to individuals. Travelers like spraying their personal space on airplanes and freshening up stale hotel rooms, Olivo said. She even touts the spray’s natural bug-repelling qualities.

From the classes at the women’s center, Olivo learned to legalize VidaAire and write a business and marketing plan. She learned Quick Books, too, and as a loan-holder, she is eligible for free technical assistance for two years.

A couple of changes are ahead for the women’s business center. Though it has been NJAWBO’s educational arm for 12 years, it will rename itself the Women’s Center for Entrepreneurship Corp. in September, become an independent 501(c)3 and in so doing position itself to solicit corporations and foundations for the funds it needs to match its federal allotment.

“We can no longer be sure of state funding,” Nafus said.

Also, the Women’s Center for Entrepreneurship Corp. will add a new focus on mid-level businesses, those that have gone through “the panic of start-up and the euphoria of stabilizing” and now need sound, tactical business planning to grow. The center, however, is retaining its governmentally mandated commitment to start-ups and underserved populations.

Nafus, who has run two businesses, including one for the sale and service of ice-resurfacing machines, said the center is particularly adroit at teaching women business skills while helping them through the issues that plague them as entrepreneurs. Those include work-life balance and a tendency toward multitasking that can inhibit their business growth.