This article originally appeared on the web site of the International Women’s Writing Guild.

Member of the Month:
Lorraine Ash 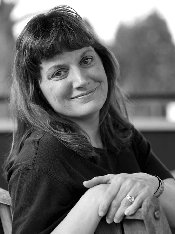 Lorraine Ash, 45, author of the new book Life Touches Life: A Mother's Story of Stillbirth and Healing (NewSage Press), has been a full-time working journalist since 1982, currently as a reporter for the Daily Record in Parsippany, New Jersey. Her articles, particularly on health and women’s issues, have appeared in daily newspapers across the country. Among her other publication credits are three historical plays and numerous essays.

Lorraine, who has a master’s degree in Communications from Fordham University, has studied writing at various venues, including the Wesleyan Writers Conference in Connecticut and the Fine Arts Work Center in Massachusetts. She lives in Allendale, New Jersey, with her husband, Bill, a trumpeter. Lorraine’s passions include Hindu philosophy, bookstores and libraries, good food, fitness, and the state of Maine. As a peer grief contact, she works one-on-one with stillbirth mothers. Life Touches Life is her first book. Learn more about her work at lorraineash.com.

At the family Thanksgiving feast in 1997, a relative looked around the table at those of us who did not have children and said, “The truth is you’re not an adult unless you have a child.” I let my silver spoon hover over Aunt Sally’s tapioca as various historic figures came to mind. Queen Elizabeth I. George Washington. Florence Nightingale. Georgia O’Keeffe. Jesus. I said nothing.

In the fall of 1998 I was newly pregnant and shopping in a Victorian boutique with a friend when she told me she was looking forward to what I would write after I had my baby. Surely, she said, my work would deepen in perspective because no one understands the world better than a woman with a baby. Only the smell of a little one’s crown, she said, and the softness of its body can teach a woman joy. I kept browsing in the shop amid artfully arranged cards and candles and lamps, but my thoughts were not as tidy. How joyful was Susan Smith when she drowned her two sons? I wondered if my friend’s philosophy accounted for any joy or wisdom differential between women who birthed their own babies and those who adopted. Again, I was silent.

This is a world in which anything can happen. More importantly, it is a world in which anything can happen to anyone, and so it was on June 2, 1999, that my daughter, Victoria Helen Ash, was stillborn at full term. Her father and I had no clue she had slipped away until June 1, when we went, as planned, to the doctor’s office before being admitted to the hospital for delivery. The doctor could not find Victoria’s heartbeat. Neither could the resident across the street in the maternity ward, or the nurse who ran the biggest, fanciest ultrasound machine in the hospital’s maternal-fetal medicine department.

No one would say the words, so I did. “You mean, my daughter is dead?” “Yes,” the nurse answered. She stared at me a moment, then looked away. “I’m going to leave you two alone. I’ll be back shortly.” She handed my husband a form on a clipboard and asked him to fill it out. He took it from her, grabbed a pen from his shirt pocket, put the board on a shelf against the wall and started writing. It was still morning, only two hours since we had arrived at the doctor’s office. The world changed that quickly.

"I’m stunned," I said. “I am utterly stunned. I’m in shock.” Then I heard a wail as my husband released the most primal, anguished sound I have ever heard. He dropped the pen, laid his head in my lap, and sobbed. He cried as if he could not stop. “I know, sweetie,” I said, rubbing his back. “We came to love her so much. She was our little Sweetlet.” Pictures of other people’s sweetlets surrounded us as we held one another. I dared not cry. Not with the reality of having to deliver her corpse still ahead of me. I had to get through the physical part first and deal with the rest when that ordeal was over.

I was wheeled back to my room on the maternity ward, but it felt different. To me, it was the dying ward and I was in the dying room. All hope had drained from it. After a C-section, I had the infection that had killed my Victoria. For two weeks I battled the childbirth fever I had read about in history books. I had it in a state-of-the-art hospital in the twentieth century after a model pregnancy, and I was lucky to have survived.

Most people met the sheer power and grit of the tragedy with silence. What easy philosophy of life accounts for the death of an innocent? Many of those who spoke to me, though, presumed to have access to the mind of god: “It is for the best.” “God needed an angel.” Then there were those who interpreted the stillbirth as an act of divine retribution: “Will you go to church now? ”Some, whose life experiences had no semblance to mine, told me: “Get over it and the sooner, the better. You’ll have another one.”

All these words had the resonance of tin. A woman does not get over the death of her child; she gets used to it. She integrates the death and the child into her identity and she wises up about the way the world really works, not the way people would have it work. The day my daughter died was the day I realized, “This is motherhood, too. This is womanhood, too. This is humanity, too, in all its painful, crazy, variegated glory.” I have not been silent since. Stillbirth gave me my voice.

I was forty when Victoria was stillborn and I had been a writer all my life. As a journalist, I had given voice to the stories of many people. Stillbirth, though, was not a story I chose. It was the story that chose me. It was what I now call my great story, the one I own like no other, the one I feel and see in so many nuances that it opens my mind to the mystery of life itself. Stillbirth is the story the universe has given me to tell, and I now believe the very order of things entrusts every serious writer with something to witness or experience and then honor with words.

I also believe that nothing is more important than telling the truth. What else will counter the myths we are taught to believe and perpetuate?

In the face of the hurtful, arrogant—and, most importantly, wrong—assumptions about motherhood that I have heard and read, I started to write what happened to me in all its detail. I started writing in a notebook in the middle of the night when I was still in my hospital bed and on morphine. I wrote an individual word some nights—a nurse’s name, a feeling or a little sentence, such as “What should I be angry at?” Afterwards, when I knew I would live, I wrote more.

I wrote about the fever and what it was like to hold my daughter’s body, to kiss her cold cheeks, to marvel over the "perfection of her crimson lips. I wrote what it was like to have milk-producing breasts when there is no baby to feed and to lose my child and the vision of my own future in the same day. I wrote how, over time, my daughter and I learned to be together, how we imbue each other’s lives with meaning across the dimensions, and how every relationship since, including that with myself, has been different. I wrote about joy as I know it, womanhood as I know it, insight as I know it."

My writings became a memoir—Life Touches Life: A Mother’s Story of Stillbirth and Healing. The book, coming out this May when I am 45, feels like a birth at last, but it is more than that. I have written into a void of literature so other women who share my fate will know it is possible to survive and even thrive. Conventional wisdom will speak of women like us as incomplete, somehow lacking. My experience will show them that in their great losses, there are treasures to find, among them rich relationships with others who know loss and are forced to recognize life as it is. In my great story, there is room for anyone who has suffered the incomprehensible.

The world is filled with shallow philosophies, judgments, and callous expression, but as writers we can do something about that. We have a choice. We can let impoverished thought and language go unchallenged in the guise of an ultimatum, edict, or even moral authority to some. Too often language reflects shallowness and distortion. We writers have voices to remedy these shortcomings. When our healing words dance with those that would hurt, we change the rhythm of the cultural conversation around us. Writing is a democratic thing to do, and nothing is more moral than to tell the truth. The power of the pen is the power of a person to reveal the world.

I have borne witness to an underside of motherhood not often glimpsed, valued or even acknowledged. With my pen I have written what my eyes have seen and my heart has felt. None of us can presume to know whence insight or joy will come, but we can hope to benefit by reading and listening to each other. Experience is multi-colored and reflects life’s infinite hues. In this rainbow I have found my salvation.