This article originally appeared in the November 13, 2006 (Morris County NJ) Daily Record and on the Daily Record web site.

War injury of loved one has given general, a Morris Hills grad, new perspective since famous 2003 capture 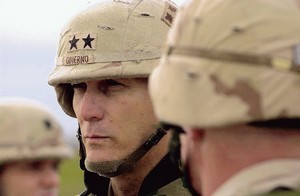 Maj. Gen. Ray Odierno, commander of the 4th Infantry Division, arrives at Forward Operating Base Bernstein, in the area around Tuz, Iraq, just prior to the beginning of the FOB’s dedication ceremony in 2004. Odierno said he wasn’t surprised soldiers found Saddam Hussein in a spider hole in Ad Dawr.

Maj. Gen. Ray Odierno commanded the 4th Infantry Division in Iraq on Dec. 13, 2003, when he got the call with the news that rocked the world.

“The first brigade commander, Col. Jim Hickey, said they’d captured HVT No. 1. High-Value Target No. 1, which was Saddam Hussein,” said Odierno, a 1972 graduate of Morris Hills High School and now a lieutenant general in the Army.

Odierno is not a man to live in the past, though he is aware that for many Americans that fateful day remains the most satisfying of the war. For him, it was the start of many significant days in his own life and in that of the war. Even as he readied for his next deployment to Iraq this month, he spoke to the Daily Record from Fort Hood, Texas, about the famous capture and what has happened since.

That the soldiers of Operation Red Dawn had found a disheveled Saddam Hussein in Ad Dawr at the bottom of a six-foot spider hole did not surprise the general. Not after 20 operations and more than 500 raids.

“But first I wanted to make sure we could officially identify him,” said Odierno, now 52. “We were 99 percent sure it was him, but there’d been rumors there were doubles out there. So the first thing on my mind was to verify and validate that this in fact was him.

“The next thing that went through my mind was, ‘What a great day this will be for the Iraqis.’ ”

Hours later, he was with the dictator but chose not to communicate with him.

“I felt there was no need for me to say anything to him,” Odierno said. “I felt our job was to evacuate him and control the area, and I wanted people who were experts at debriefing to talk to him.”

George Hrobuchak of Denville, Odierno’s football coach at Morris Hills High School, remembers watching the news that day and learning the tight end on his undefeated team of 1971 had captured Saddam.

“I burst with pride to know that a kid from Rockaway could accomplish a worldwide feat,” said Hrobuchak, now retired. “I was beside myself.”

Odierno, who was in transit to Iraq when the dictator’s death sentence was announced, had been following Saddam’s trials “a bit.” Before he left he said his focus was never on what happened in the courtroom, or the results.

“The whole point is we’re going through a democratic process rule of law,” Odierno said. “He’s getting an opportunity he never gave anybody else, and that shows how Iraq is beginning to change.” 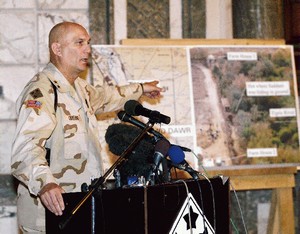 Odierno shows where former Iraqi leader Saddam Hussein was arrested, during press conference in Tikrit on Dec. 14, 2003. For Odierno, the capture was just the start of many significant days in the war and his life.

The capture of Saddam was a significant moment in time, the general said, pointing out it would not have been possible without the hard work of a lot of young soldiers. But time moves on, he said. One of the most important things now is helping create an Iraqi government and security force sturdy enough to take on their own fight.

A war of precision

The challenge in fighting terrorists is to be precise, in Odierno’s estimation. The problem of the soldier deciding when to pull the trigger is precision. Whom will he hit? The problem of heads of state setting policy is the same. Whom will it hit?

Precision is needed every day on the ground. Precision of strategy, manpower, targeting and intelligence down to the level of finding a dictator in one of 30 spider holes on just the right day at just the right hour.

In the meantime, every imprecise strike can kill an ally, or alienate him, he said. The age of fast wars such as Desert Storm are over.

This war has offered Odierno the chance to use the military prowess he has gleaned from an education at the U.S. Military Academy at West Point and the U.S. Army War College, as well as 30 years of various command positions at home and abroad. But it also has expanded his perspective as a warrior and a father.

Into the ‘peacetime routine’

Though a commander, it took him a while to mentally wind down after 13 months of daily military duty when he returned home in April 2004.

“It’s important for 30 to 60 days after you come back to have a program in place where you can really unwind and understand what you’ve been through,” he said. “We don’t allow people to immediately go on leave. We make them go through a 30-day reintegration period where they don’t have long hours. But the hours are spent talking, counseling, advising, those kinds of things, to help them get back into what I call a peacetime routine.”

His return home was bittersweet because he left the war theater as his son, Anthony Odierno, also a West Point graduate and then a lieutenant platoon leader with the 1st Cavalry Division, was entering. The two crossed paths in Kuwait.

Odierno graduated from Morris Hills High School with the Class of 1972.

Returning home to New Jersey for the Easter holiday and being with his whole family helped Odierno regain a sense of normalcy. But the decompression did not last long: In August 2004, Anthony, then 26, was injured in an insurgent RPG attack as he led an operation in Baghdad. He lost his left arm above the elbow.

“It’s very difficult when you have a child injured, but I will tell you my son’s resiliency, his mental and physical toughness, and the way he’s overcome this, has been an incredible thing for my wife, Linda, and I to watch,” Odierno said. “I am very, very proud of him.”

Capt. Anthony Odierno is still in the Army. He speaks for the Wounded Warrior Project and this year competed in the New York City and Chicago triathlons.

“What happened to Anthony helps me put things in perspective,” the general said. “Quite frequently, I still visit soldiers at Walter Reed, Bethesda, and also down here in San Antonio, where we have a huge medical center. It’s easier for me to talk with them and their parents because I’ve been through it. My wife and I like to do that and let other parents know what we experienced.”

The general and his wife spent time with Missy Benoit, mother of Jimmy Benoit of Wharton, who sustained extensive internal injuries when the vehicle he was driving was attacked during a roadside bombing in Baghdad. The three bonded instantly by virtue of being from the same place, the general said.

Seven months after he returned from Iraq, Odierno became assistant to Gen. Peter Pace on the Joint Chiefs of Staff, a position in which he advised Secretaries of State Colin Powell and Condoleezza Rice. He learned a lot during that assignment, he said, and had the chance to see how political issues get involved in war.

“It gave me an understanding that the military is just one of the ways we solve problems,” he said. “There are many other ways we can solve problems.”

Through all his experiences, a constant has been the pride he feels at the warmth and support the citizens of New Jersey have shown their native sons and daughters when they return home.

“It’s important that they have that because we’re an all-volunteer Army,” he said. “These young men and women love their country, and they’re doing this for their country. It’s important people continue to back them. So far, it’s been great.”

A lifetime of service

Lt. Gen. Ray Odierno has earned the following educational credentials and military honors prior to and during a continuing military career that already has spanned more than 30 years.

The war in Iraq and Afghanistan is being fought by Morris-area sons and daughters, fathers and mothers. The Daily Record’s year-long series, “Back from the Front,” offers readers a look at the personal challenges and sacrifices local servicepeople have faced on the battlefield and as they return home.