This article originally appeared in the July 1, 2009 (Morris County NJ) Daily Record and on the Daily Record web site.

Gelato catching on in Morris

Gelato — Italian ice cream — is starting to catch on in Morris County, where gelaterias offer dozens of flavors to try.

While Americans are just learning about the low fat content and intense natural tastes of this frozen treat, Italians have prized gelato for a very long time.

Bernardo Buontalenti first prepared gelato in the 16th century for a party thrown by the Medici family for the king of Spain, according to a history prepared by PreGel, the largest manufacturer of ingredients for gelato worldwide. But the origins of today’s limitless gelato creations date back even further to ancient times when Romans ate the ice of volcanoes topped with honey.

“When I was in Italy, I ate gelato for breakfast and lunch,” said 26-year-old Erica Ungerleider, former Italian teacher at Frelinghuysen Middle School in Morristown and current owner of Lo Scopo Gelateria & Caffe in Boonton. She referred to a college trip to Treviso, where she became so enamored of the Italian treat that she implored a shop owner to show her the art of gelato-making.

Little did Ungerleider know then she would open a family shop. She enjoys making gelato from scratch, and her passion is coming up with new flavors to please European and American palates.

There are enough places and amazing flavors in Morris for gelato lovers to go on their own taste safari. Check out the rose vanilla (vanilla, cherry and rose flavor) or sugar-free custard gelato at Ice Milan Cafe & Gelateria in Whippany. And there is the chocolate orange or stracciatela (a white base with Italian chocolate shavings) at Pomodoro Gelato in Morristown.

There also is the yummy peanut butter and jelly gelato at Mara’s Cafe & Bakery in Denville, and an almond gelato to die for at Mamma Che Buono at Bridgewater Commons.

Here’s a look at two Morris gelaterias — and gelato makers — to get newbies started:

Pete Cipollini of Morristown works in the recycling business but always dabbled in creating desserts, particularly ice creams and gelati, for friends and family. He’s taken classes with masters of the art from Sicily.

“But a lot is experimenting on my own,” he said, motioning toward his brightly covered case of gelato, each of which has a fresh taste as exciting as its appearance. “I thought it might be a good idea to try it commercially. So far it’s going well.”

Pomodoro Gelato, attached to a pizzeria by the same name, opened this past April. Cipollini gets a charge out of watching the delight on the faces of people who try gelato for the first time, particularly since he pays such attention to the quality of the ingredients he uses. Gelato, he said, is about letting natural flavors tingle the taste buds.

Take the mint flavors in his dessert case, which includes some ice cream and sorbetto. The white mint mojito gelato and the green mint chocolate chip ice cream are made with mint leaves.

Cipollini’s sorbettos, made with water, have a velvety texture and taste creamy though they contain no cream or milk. Like gelato, they’re tumbled in a machine and very little air is added. It’s a slow process, he said, but the results are rewarding. 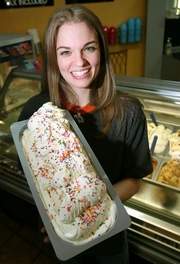 Erica Ungerleider, a gelato maker at LoScopo Gelateria and Caffe in Boonton, displays a pan of birthday cake-flavored gelato.

When Erica Ungerleider isn’t making gelato, she runs the counter at Lo Scopo Gelateria & Caffe on Boonton’s Main Street. After two years of the routine she’s as enthusiastic as ever.

She likes pleasing everybody and would welcome an even larger case so she could fit in even more of the flavors she makes. At first Ungerleider was leery of Americanizing the flavors and made lots of the traditional Italian ones, like cannoli, strawberry, banana, pistachio and nutella (chocolate hazelnut). Her classical sensibilities also yielded her own amarena gelato, a smooth cherry vanilla. Amarena cherries, grown mostly in Bologna and Modena, are small, dark and slightly sour.

But then Ungerleider started having fun with American flavors, which is how Almond Joy gelato appeared in her case as well as cookies ’n’ cream, chocolate peanut butter with Reese’s Peanut Butter Cups and her famous best-selling birthday cake.

“You don’t really find peanut butter in Italy,” Ungerleider said. “I don’t think they have Oreos there, either, so you wouldn’t find cookies ’n’ cream.”

A dog lover, Ungerleider noticed customers who stopped for gelato while walking their dogs bought small cups of vanilla for Fido to enjoy. Since dairy products aren’t great for canine digestive systems, she created a natural, low-lactose alternative for dogs — pup-sicles, which feature a plain yogurt base, a Milk-Bone and other flavors dogs like, all on a rawhide stick.

She figured that would make everybody happy, which seems to be the goal of gelato makers everywhere.

“Ice cream is whipped with air, which amplifies the volume but also takes away from the flavor. That’s why butterfat is added to ice cream. Gelato is tumbled in a machine and very little air is pumped into it. The process is slow but allows the gelato to stay dense and retain the taste of everything that’s put into it.”

Below are a few places to enjoy Italian gelato locally: