This article originally appeared in the November 28, 2010 (Morris County NJ) Daily Record and on the Daily Record web site.

Does God exist? Are prayers answered?

What does Morris County believe? Probably not what most people would think.

Among the findings of the Daily Record’s “What do you believe?” survey on faith: 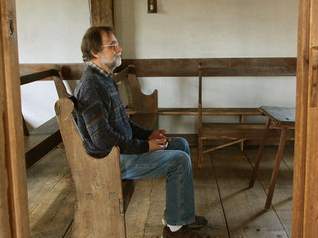 Of the total 1,075 survey respondents, some 300 belong to nontraditional religions or profess themselves to be spiritual but not religious, and 200 call themselves atheist, agnostic or not religious.

Catholics and ex-Catholics, the most diverse faith group, appeared in almost every faith category, as they explore traditions and ideas that either supplement or replace their Catholicism.

The results mostly mirror the beliefs of the country, according to Jody Caldwell, who holds a doctorate in religion and society and teaches the sociology of religion at Drew University in Madison.

But readers who took the survey show a slightly more skeptical tendency than the population at large, she added. The scientific 2007 Baylor Religion Survey shows 75 percent of the nation believes in God, and the 2008 U.S. Religious Landscape Survey of the Pew Forum on Religion & Public Life shows 72 percent believe in life after death.

“What’s most interesting is the way in which religion is shown to be such a dynamic and shifting reality now,” said Caldwell, who interpreted the Daily Record survey results.

The fluid nature of religious belief is clearly evident in the results for practicing Catholics and ex-Catholics, according to Caldwell. “Catholics are an issue,” she said.

In 2000, the last year for which statistics are available, Catholics were the second largest belief group in Morris County, numbering 179,017 church members, according to the Association of Religion Data Archives. (At that time the only larger group, unclaimed, numbered 202,649.)

“Pew found that 30 percent of Americans who were raised Catholic have left the Catholic church,” Caldwell said. “So the exodus of native-born Catholics is significant. There are a lot of them, so it’s not surprising to see them turn up in other belief groups.”

One 60-something Hopatcong woman was, like many other Catholic survey-takers, reluctant to publicly express discontentment with the church. She spoke anonymously. After sending all her children to Catholic schools, she said, she experienced a crisis of faith following the pedophile priests scandals.

“It’s a habit to call myself Catholic,” she said. “Now my husband and I describe ourselves as agnostics. I want to believe in something spiritual, but I don’t want to lock myself into one particular God because in the Catholic church I now see a lot of inconsistencies.”

She cannot understand, she said, how a murderer can be forgiven his sin in confession while a Catholic who married the wrong person and seeks a divorce cannot be forgiven. 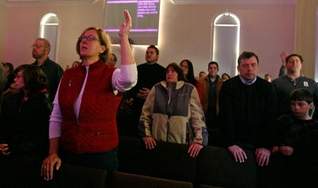 Lois Henderson, 48, of Mendham was raised Catholic but left the church at age 21 when she accepted Jesus Christ as her lord and savior.

“Being a born-again Christian means I have a personal relationship with God,” she said. “Catholicism is more of a religion. It teaches of the Trinity and the birth of Jesus and all that, but with a religion there are a bunch of man-made rules and laws. For example, a priest can’t get married.”

American Catholics are a diverse, free-thinking group that is all over the board in terms of politics, moral views and beliefs, according to Caldwell.

A 30-something practicing Catholic man from Randolph, also anonymous, is pro-choice and believes women should be ordained, bucking church doctrine on both issues. He also doesn’t see time spent in church as more important than time spent with his family.

“I grew up in a fairly religious home,” he said. “I’ll always be that religion, but I also feel I’'m free to make my own judgments outside of what the church says.”

Why do Catholics feel so free when their church has such a clear, centralized hierarchy? Because, Caldwell said, American Catholics are first loyal to their local parishes.

“They’re less interested in the hierarchy,” she explained, “despite the fact the hierarchy wants to exert more authority.”

This tendency explains why the pedophile priests scandal has had little impact on Catholic church attendance rates in the long haul.

“While there is significant and rising dissatisfaction with the upper echelons of the hierarchy,” Caldwell said, “generally speaking, people think their parish priest is doing a good job.”

As diverse a group as Catholics may be, according to Caldwell, Jews are doubly so because they span an even larger spectrum of belief ranging from the Hasidim to the Reconstructionists.

Mormons and Muslims taking the Daily Record survey were much more uniformly traditional in their beliefs than either Catholics, other Christians or Jews. A total of 100 percent of survey-takers in both groups said they believed in God. 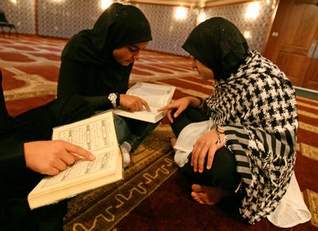 Hajira Khan, 12, gets help reading the Quran from her older sister Amena, 16. The Khan family prays and studies at the Jam-e-Masjid Islamic Center in Boonton. (Staff photo: Karen Mancinelli)

Fozia Khan, 19, of Boonton, certainly does.

“There’s no face to him. He doesn’t have a physical being,” she said. “He’s an omnipotent being. To me, he’s omnipresent in a way that he can see into your heart as opposed to looking at things on the surface. My personal belief is that God judges you based on your intentions.”

“Those answers may have to do with the reality that both Mormons and Muslims are significantly in the minority,” said Caldwell. The Pew Forum identified 1.7 percent of Americans as Mormon and 0.8 percent as Muslim.

“Both groups are perceived by the rest of society a little bit dubiously,” Caldwell added. “There is significant cost involved in belonging to either faith because of social status and the requirements of the religion. People who have doubts will leave.”

For guidance on living a moral life, Khan reads the Quran, which Muslims believe was relayed to Muhammad from the angel Gabriel, she said, though over time cultural ideals corrupted the text.

“You’re supposed to read the Quran and figure out what’s right and what’s wrong,” Khan said, “and from that you should be able to decide on things that aren’t directly addressed in the Quran.”

Because Christianity and Judaism are “almost the default religious positions” in American society, Caldwell said, it is possible for their members to derive more of a cultural or ethnic identity from their faiths as opposed to a religious one. Christians and Jews are more likely to look to other books, in addition to their holy books, for guidance.

“To find cultural Christians or cultural Jews accepting ‘my way or the highway’ is less likely,” she said.

Some Christians, however, are traditional in their beliefs.

“Once it divided and you had your Catholic and your Protestant, we lost a little,” she said. “I believe the true traditional Christian church is the Orthodox church.”

Her belief in an absolute source of evil is as fervent. She describes herself as an educated person who believes in science and also believes that evil exists among people who don’t know whether they have a faith — people like her daughter, who committed suicide.

“That makes them vulnerable,” she said.

Alice Lazore from Denville is one of 924 people who took the Daily Records, “What Do You Believe?” survey. Alice is a Mohawk and performed a water healing ceremony that blesses Mother Earth. In the ceremony she lights sage and scatters tobacco, which is very sacred in Native American traditions, into a stream. (Staff photo: Meghan Ryan)

On matters of politics, Mormons and Muslims scored the highest on whether their spiritual beliefs affected their positions on political and social issues compared with other groups — Mormons, 75 percent; Muslims, 64; Unitarians, 50; Jews 48, and Catholics, 45.

“This goes back to the lack of cohesiveness about Jews and Catholics, who are all over the place,” Caldwell said, offering more national statistics from the Pew survey:

Why do only half of Unitarians, known for involvement in social issues, say their spiritual beliefs affect their political positions?

“There’s a compartmentalizing that happens with more liberal religious organizations,” Caldwell said. “For their members, religion is only part of their life. They don’t necessarily believe that they have to hold up all of their actions against some sort of religious yardstick.”

Jo Sippie-Gora of Kinnelon, a survey-taker who belongs to the Morristown Unitarian Fellowship, said she has a deep feeling about creation and “every living thing” and so can’t rationalize killing children in other countries.

“So, yes, in that way, my beliefs affect my political positions,” she said. But her feeling about creation doesn’t necessarily translate into a belief in God.

“I don’t think about God,” she said. “If it’s the case that God formed the universe and galaxies and made that all possible, that’s OK with me. But I really don’t care who kicked off the game.”

Science is the thing that most deeply moves survey-taker Dave Peck, 67, of Denville. The retired biology and chemistry teacher grew up Dutch Reformed but is now an atheist.

“I don’t like to be encouraged to believe in things that aren’t verified,” he said. “More or less, I look at all religion as superstition. I know that doesn’t sit well with a lot of people, my friends included. But that’s the way I see it.”

A member of the Freedom from Religion Foundation, Peck said he believes it’s better to love than hate, better to do the right thing than the wrong thing. But in his mind it makes sense that the universe can do all the things other people say God must be doing.

Peck is not alone in his beliefs. A total of 195 Daily Record survey-takers call themselves atheist or agnostic; the Baylor survey showed 4.2 percent of Americans self-identify as atheist.

Peck is unfazed by the prospect of no afterlife.

“Once you die,” he said, “you’re no longer conscious of the world.”

And he just can’t think of any better peace than that.