This article originally appeared in the May 10, 2009 (Morris County NJ) Daily Record and on the Daily Record web site.

Frany Patelia, whose baby is due in July, clutched a yellow and black Cost Cutters bag as she waited for her appointment at Sister Catherine’s Community Health Center in Dover, part of the St. Clare’s Health System.

“I feel good here,” said Frany, who looks forward to the birth of her child in the Katena Center for Mother and Child at the hospital’s Denville campus.

Her husband, Navnit, a full-time cashier at a convenience store, has no health insurance. Neither does Frany, who cannot find enough continuous work to qualify for coverage.

When the couple, Indian immigrants, showed up at the clinic in January, three months into the pregnancy, they made too much to qualify for Medicaid, according to Nettie Mendez, medical social worker. When Frany was laid off, she became eligible. Her baby is covered for the first year of his or her life, and Frany remains covered until two months after the birth.

At that point Mendez will see if Frany qualifies for insurance in another Medicaid program. If not, she will be a candidate for charity care under the New Jersey Hospital Care Payment Assistance Program, granted in percentages of coverage depending on income. St. Clare’s would continue to treat Frany and those like her, though it was hit with a $3.2 million, or 15 percent, decrease in charity care funding from the state to care for such patients in fiscal 2009, the current budget year until July 1. 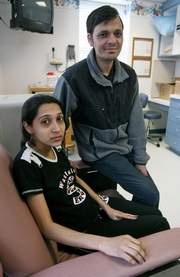 Frany and Navnit Patelia of Parsippany are expecting their first child. Because they don’t have health insurance, they will likely have to rely on charity care at St. Clare’s.

Like all New Jersey hospitals since 1971, St. Clare’s is legally obliged to treat all patients regardless of their ability to pay. But the care, particularly when more patients are in need, can come at a cost -- the financial health of the hospital itself.

That American hospitals have been in bad shape in recent years is no secret. But the economic downturn has made things worse.

“We treat patients because it’s the moral thing to do,” said Les Hirsch, president and CEO of St. Clare’s. Still, there are monetary realities. St. Clare’s provided free prenatal care for Frany before Medicaid kicked in. For the duration of her pregnancy the hospital will be paid, as is typical for Medicaid patients, 70 percent of the actual cost of her care.

The effect of such reduced payment to hospitals can be offset in a number of ways. The 2008 report of the New Jersey Commission on Rationalizing Health Care Resources, a panel created by Gov. Jon S. Corzine, notes 38 New Jersey hospitals receive supplemental Medicaid payments -- $60 million for graduate medical education and $203 million for providing specific services, such as AIDS treatment, to low-income populations through the Hospital Relief Subsidy Fund.

But some hospitals in the state qualify for neither.

“Our hospitals, Catholic or otherwise, cannot be viewed as the salvation for society,” Hirsch said, “because the problems go beyond any of our collective means as hospitals to deal with them.”

One big problem, according to many in the industry, is systematic governmental underfunding -- and not only for Medicaid.

“We are not paid adequately for charity care, which is the care we provide to any uninsured patient who comes through our doors,” said Betsy Ryan, president and CEO of the New Jersey Hospital Association. “There’s a very complex formula that distributes a pool of money around the state to hospitals, but some hospitals this year get 10 cents for every dollar of care they provide to a charity patient. You don’t need to be a rocket scientist to realize that if you’re losing 90 cents to the dollar on every patient you treat, it’s going to have an impact upon your financial viability.”

If the state were to fully fund charity care to cover 100 percent of costs, an additional $500 million above and beyond the $1 billion already spent would be required, according to the governor’s commission, headed by Dr. Uwe Reinhardt, professor of economics and public affairs at Princeton University and one of the world’s leading authorities on health care economics.

Yet the problem does not stop there. At least hospitals are reimbursed something for patients on charity care, Medicaid and Medicare. Their most severe financial losses stem from uninsured patients whose income is too high to qualify for assistance but too low to afford private health insurance. A study released in March by Families USA, a consumer health advocacy group, reported there was a point in 2007 and 2008 when the ranks of uninsured Americans swelled to 86.7 million.

“There are so many clients needing help,” said Mendez, of St. Clare’s. “One of the categories having a very difficult time are the self-employed.”

Prior to August of last year, an uninsured New Jersey resident received hospital bills based on the full list prices on a hospital’s charge master list. In other words, the highest rates possible, according to the governor’s commission. These very high bills are paid by workers compensation and motor vehicle insurers, small insurance carriers with little bargaining clout and some wealthy patients. But the uninsured who are middle class or below the poverty level never could pay them.

In compliance with a new law passed in response to the commission’s report, as of last August uninsured New Jersey residents are billed Medicare rates plus 15 percent. While that’s an improvement, it is still more than some patients can pay.

Any bill that goes unpaid is bad debt, which Hirsch says is another form of free care and a big problem for New Jersey hospitals, half of which are losing money while “the vast majority of the remainder are just marginally breaking even.”

Bad debt is a factor even among patients with private insurance, according to Hirsch, who said those who are insured often cannot afford their high deductibles and co-pays.

“If we don’t collect the money that is the patient’s responsibility on the front end of a procedure,” he said, “that money ends up on the back end and is either not easily collected or not collected at all.”

At nearby Morristown Memorial Hospital, officials say collections are down 10 percent and the number of uninsured patients who come to the emergency room has spiked 30 to 40 percent in the last six to eight months.

In the meantime, St. Clare’s, like many New Jersey hospitals, has turned to cash reserves. It has slimmed its workforce, eliminating 180 management and support positions this past January. It has strengthened its point-of-service collections to reduce bad debt, and reviewed its billing system to reduce the number of denials it receives from insurance companies. It also has joined Catholic Health Initiatives to make the purchase of supplies more effective.

“We have to be able to demonstrate that we are high quality in terms of our clinical outcomes and that our costs are in line with best-practice benchmarks,” Hirsch said. “Then if we’re still having trouble keeping our heads above water, that says there is still something wrong with the fundamentals of the structure of the market.”

St. Clare’s is still having trouble. It is running at an 8 to 9 percent negative margin, Hirsch said. Its overall fundraising dollars are down by a third. In boom years, elective procedures would help stabilize losses incurred in caring for subsidized patients. But at St. Clare’s and elsewhere, many patients are foregoing optional surgeries and treatments for lack of money. Some are even hesitating to get screenings.

“A lot of women are nervous about getting a mammography because they’re worried about the cost if results show they need additional views or a biopsy,” said Dr. Paul Friedman, breast radiologist at the Carol W. and Julius A. Rippel Breast Center at Morristown Memorial Hospital. “They know the scenario, and they don’t even want to get the preventative care.”

“We understand patients have economic anxieties,” he said, “but we try to tell them the importance of not delaying or skipping a year. In the end, their health is the most important aspect.”

In the meantime, Martha Lehlbach, coordinator of cancer screening at the Carol G. Simon Cancer Center at Morristown Memorial, connects uninsured patients with New Jersey Cancer Education and Early Detection charity care coverage, designed for county residents without health insurance who have too much money to qualify for a Medicaid program and are too young for Medicare. The program provides men and women in this group free screenings for multiple cancers.

“If a woman, say, is diagnosed with breast or cervical cancer and is a citizen or has a green card for at least five years,” Lehlbach said, “I can then get them into a Medicaid program.”

While patients’ needs for hospitals are obvious, the need of the greater communities is not.

“We are economic engines,” said Ryan, of the New Jersey Hospital Association, “and often the largest employer in the areas we serve.”

The good news, Ryan said, is hospitals are good at belt-tightening because they’ve been doing it for years. But the bad news is that “it’s getting increasingly harder.”

Will President Barack Obama’s American Recovery and Reinvestment Act of 2009, commonly known as the stimulus package, help New Jersey hospitals? The state will receive $2.2 billion in Federal Medical Assistance Percentages over 27 months spanning more than three state fiscal years, according to Sue Esterman, spokeswoman for the state Department of Human Services. FMAP is one of many Medicaid funds; it reimburses hospitals on behalf of individuals.

“We have high hopes,” said Kerry Kelly, spokeswoman for the hospital association, “but it remains to be seen how the state will choose to use the new money.” The state could expand eligibility and allow more of the uninsured into the system, she said, or it could increase benefits per each uninsured person. Or a combination.

But helping patients and health care providers in their current state is not the same as fixing the health care system of which hospitals are an essential part, especially in New Jersey where nine hospitals have closed in the past two years.

New Jersey hospitals are particularly troubled, according to the governor’s commission, because of a unique convergence of conditions. They are highly leveraged and maintain an overall surplus of beds. Also, residents here use a lot of health services; in 2002 Medicare spending per beneficiary in New Jersey was $8,661, higher than the national average by 27 percent.

All hospitals can benefit from creating a new standardized, transparent information infrastructure, the commission suggests, as well as regulating competition from ambulatory centers owned by physicians. Currently there is nothing to stop physicians from diverting more profitable patients to their own centers and less profitable ones to hospitals.

Mostly, though, Reinhardt writes, hospitals are wrestling with a “peculiar economics” of freedoms and mandates that reflect Americans’ ambivalence about providing health care.

“The same citizenry which signals its preference for a class-based health system through the payment mechanism,” he writes, “soothes its conscience by holding physicians and hospitals to strictly egalitarian standards when it comes to the treatment of all socio-economic classes.”

Free-market systems do not reward efficiency or superior outcomes, he suggests, and they respond to those with means, not needs.