This article originally appeared in the May 31, 2009 (Morris County NJ) Daily Record and on the Daily Record web site.

Group tries to frame the big picture of life

Some people love a ballgame or a great meal. Others are jewelry junkies or art collectors. Bill Hungerford, co-president of the Association for Higher Awareness, loves a good cosmology.

A what? A cosmology is a way to frame the big picture of life, including how people fit into it. We talked about it at his home on Cedar Lake.

“To shift a cosmology changes your view of life a lot,” he said.

That’s what happens whenever the association — known as A-HA! — meets monthly on Tuesday nights at the Masonic Center in Morristown. The group, formed in 1986, is a specialized speakers’ bureau that espouses no particular cosmology. It just brings in notable personalities from many fields, including philosophers, mythologists, psychologists, healers and scientists.

“The most important question is the cosmic question: Who am I? Why am I here?” Rick Jarow told a gathering of 50 at the May presentation. His topic: “The Healing Wisdom of Hermes.”

Jarow, a speaker, author and associate professor of religious studies at Vassar College, is internationally known for his “anti-career” work and his innovations concerning the sacred and the psyche. That crisp spring night he expounded on Hermetic principles for living well, including the uniquely human challenge of living among opposites.

“Much of what passes for healing is reaction,” Jarow said. “We are sick, we want wellness. We are poor. We want money.”

But true freedom is escaping the polarity. How? By each of us creating some vessel — whether it be craft, art or a discipline such as meditation — in which we can experience the opposites but not feel as if we are marionettes being played by them. 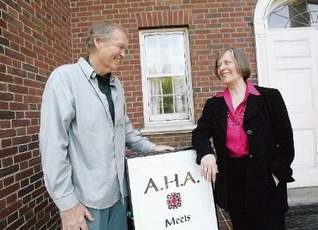 Bill Hungerford, left, and Carol Tokar are co-presidents of the Association for Higher Awareness.

This is the kind of stuff the 72-year-old Hungerford — whose co-president is Carol Tokar, also of Cedar Lake — has been soaking in most of his life. Raised in Seattle in a Protestant family, he shed his traditional religious background in college. He served in the U.S. Navy and U.S. Navy Reserve, earned a master’s degree in human development and succeeded in a corporate career in administration.

His off-hours were even more intriguing. Hungerford started hiking mountains with his dad, a Presbyterian deacon, but took the hobby to new heights as an adult. He climbed Mount Kilimanjaro and Mount Rainier. He climbed on Annapurna and twice on Mount Everest, which is where he and his entourage (including his wife) were guided by the sherpas who live in the Nepalese Himalayas.

“When they come to the door of their huts or houses, their faces are radiant,” Hungerford said. “You couldn’t really even be around someone like that in business. You just couldn’t have someone so exceedingly happy at every moment.” The guides took the group to places most tourists can’t go — caves and retreats and monasteries. “I found myself extremely interested in all of it.”

One night when Hungerford questioned the head sherpa on whether it was humane to leave the yaks to stand out all night in stormy, sub-zero weather, he was told the animals are adapted to the conditions. That night the sherpa slept with the yaks. In the morning Hungerford greeted the sherpa, who was sitting against a snowdrift.

“I said, ‘Good morning,’ ” Hungerford recalled. “He put up his hand. It was warm as toast.”

That day Hungerford learned about tumo, a rite of passage in which sherpa teens are dipped in a river at midnight and covered in wet sheets when they emerge. They are required to dry three sheets with their body heat.

“If we could control our temperature like they could, we wouldn’t even need fossil fuels to heat our houses,” Hungerford said. “I realized these people were onto something really big and I wanted to know what it was.”

As the years have gone by, his penchant for viewing human life in endless ways has only deepened. He applies the cosmologies to his life. Hungerford waxes rhapsodic about Ho’oponopono, a simple Hawaiian Huna practice that allows a person to wipe himself clean of destructive patterns.

Similarly transformational for him is the work of author/scientist Orest Bedrij, who taught Hungerford to tap directly into “infinite intelligence,” bypassing the complicating, obfuscating subconscious, conscious and superconscious minds. The messages received, he said, are simple, loving, life-directing and practical. His spiritual work helped release him from the patterns that held him in alcoholism, from which he has recovered these past 16 years.

Hungerford says he is not an original thinker. But he voraciously seeks and absorbs many forms of others’ thinking, which is what A-HA! is all about. The group has no dues and no members, favoring only a mailing list notified of presentations via email. Its seven-member board of directors likes to keep a low profile.

The group does have a spiritual advisor — Ilona Hress, whose multi-faceted healing practice, Growing Consciousness, is based in Madison. She helps A-HA! choose an annual theme for its programs.

“This is spiritual learning in an emotionally warm setting,” Hress said. “The people who come are cared about before they even arrive.”

Not unlike Hungerford’s experience with the sherpas. Some feelings are universal. Or at least they’re supposed to be.

To learn more about the Association for Higher Awareness, visit www.ahanj.org. Admission to programs is $10. The next one, scheduled for Tuesday, is "Awaken the House of Light Within You" featuring Marilyn and Christi Calvano. Reach Bill Hungerford at bhungerford@optimum.net.